From IT Pros to Retired World Travelers 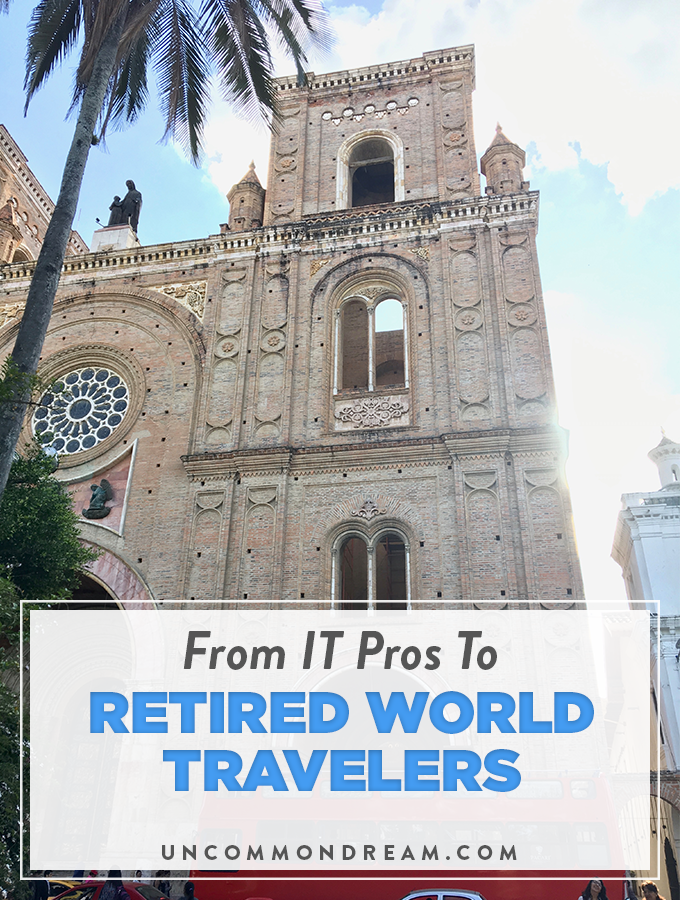 Teresa (49), Michael (42), and their young son are currently living in Cuenca, Ecuador. They’re financially independent, retired early, learning Spanish, and generally enjoying the life of their choosing. They are ordinary people living a seemingly extraordinary life. How did they get there?

We were lucky enough to meet this family during our first three month stay in Cuenca and have enjoyed seeing them again now that we’re back. We met at the nearby park where a group of expats with kids would gather on Saturday mornings. Michael figured out within just a few minutes of talking to (my) Michael that they were both fans of Mr. Money Mustache and members of the FI/RE community. Michael will be the first to tell you that he is super competitive — I suspect he was quite pleased with himself for having sniffed us out so quickly!

Michael and Teresa were kind enough to sit down and share their story with us. When did they realize financial independence was a possibility? How and when did they achieve it? What advice do they have for others working towards the same goal? Below is a distilled version of their interesting (and totally achievable) narrative. 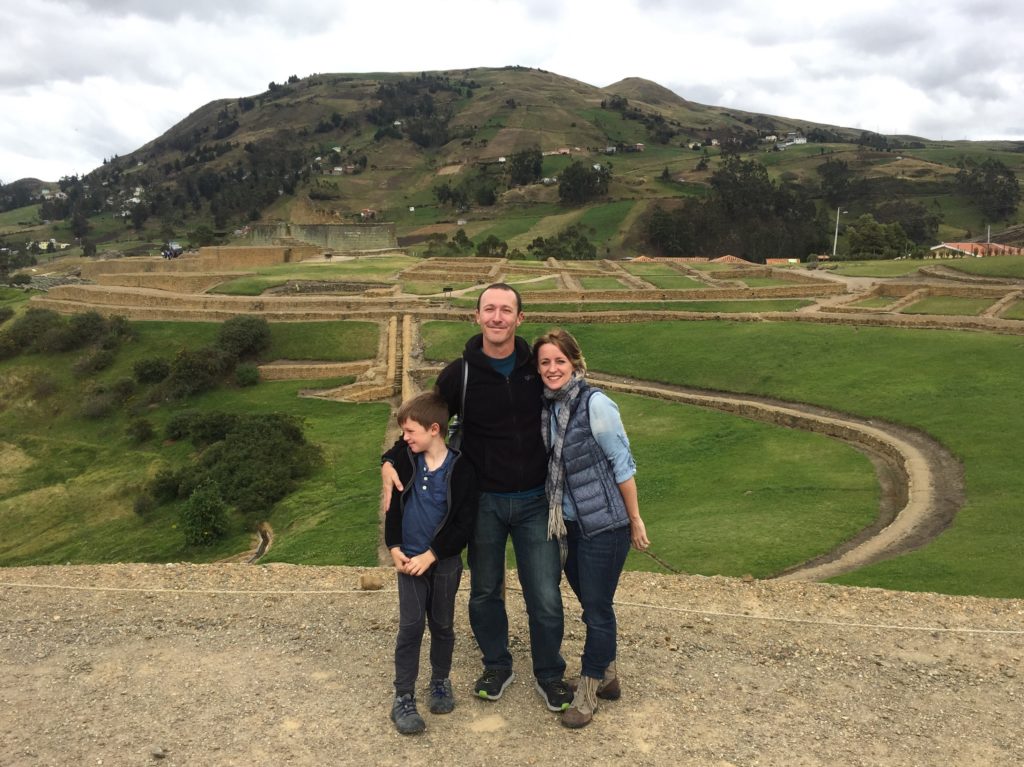 Love this family! So glad we met them in our travels to Ecuador.

Although we didn’t dive too deeply into their upbringings, I gathered from both of them that they were taught some basic good money habits, but didn’t grow up on either end of the financial spectrum (extreme wealth or poverty). Teresa was fortunate to start her professional career without any debt. Michael had some student loans, but he had worked through school in order to keep his debts low.

After college, they both joined the ranks of young twenty-something techies living in San Francisco during the dot com explosion. Michael was making a lot of money and spending all of it despite his parents’ warnings not to do just that. He achieved something of a financial epiphany when, as a young independent man with a healthy salary, he had to to call his mom to borrow $100. She sent him the money and a copy of Quicken software. She let him know it was his one and only “get out of jail free” card.

From there, he attached his accounts to the software and explored some of the “what if” scenarios. He was highly motivated by the information he found in there. He loves charts—especially those that go up and to the right. He started saving 30 – 50% of his income and, as he put it, “crushing” his debt.

Teresa and Michael met and got married (I’m sure there’s plenty of romance to share, but this just isn’t that type of article). They kept working in their respective dot com roles, continued saving, bought a house, and slowly rode the charts on Michael’s Quicken software up and to the right. Like many young couples, they shared dreams of travel, freedom, and not having to work. In fact, they discussed it so often that they decided they needed to either do it or stop talking about. For a time, they just stopped talking about it. Despite their high-paying jobs, early retirement didn’t seem possible. 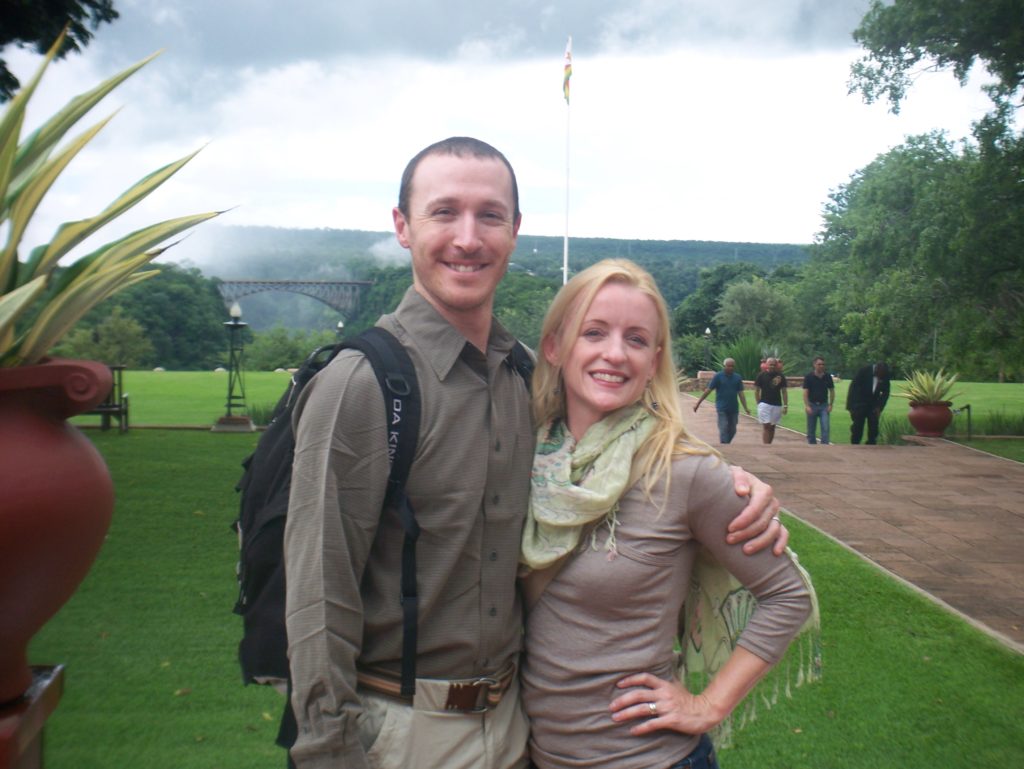 Teresa and Michael took plenty of vacations while working, but they were always big trips squeezed into small chunks of time. Here they are at Victoria Falls in Zimbabwe.

Meanwhile, right around 2008, Michael took on a probationary position as the CFO for his company. He had enough financial experience to convince his partners to give him a chance. This is when he started doing a lot of research about money. Later, he came across Mr. Money Mustache and his “Zero to Hero” article. That was the game changer for Michael. 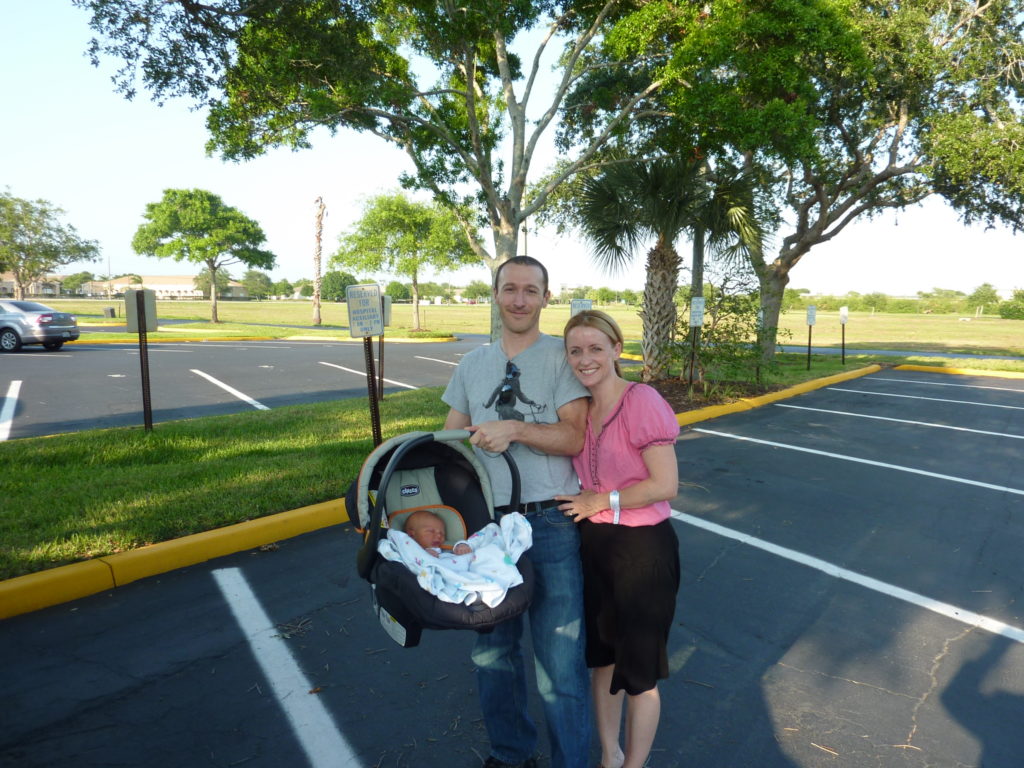 As is the case for any new parents, life changes a bit when a wee one comes along!

For Teresa, the defining moment came when they were “shopping” for a good school district for their son. They were looking to buy a home in a neighborhood with one of the best schools in the Bay area. She suddenly realized they were about to spend A LOT of money for a really crappy house in a great district. They were riding the wave of what everyone else in their demographic was doing. She decided she just didn’t want to do that.

Combine all of the above with the fact that they were both unhappy with their work. Finally, they asked themselves, “what if we just try?” What does failure look like? Failure, they decided, simply looked like them doing the same thing they’ve been doing, but a year later. They decided to go for it.

The transition took time. As Michael described it, “our previous lives died.” They quit their jobs. They had to have an estate sale. It took time to shut things down. But once they were ready, they created a bucket list. Their first goal was to spend time with Michael’s sister and kids in Austin, Texas. They drove across the country in a camper and signed a one year lease. 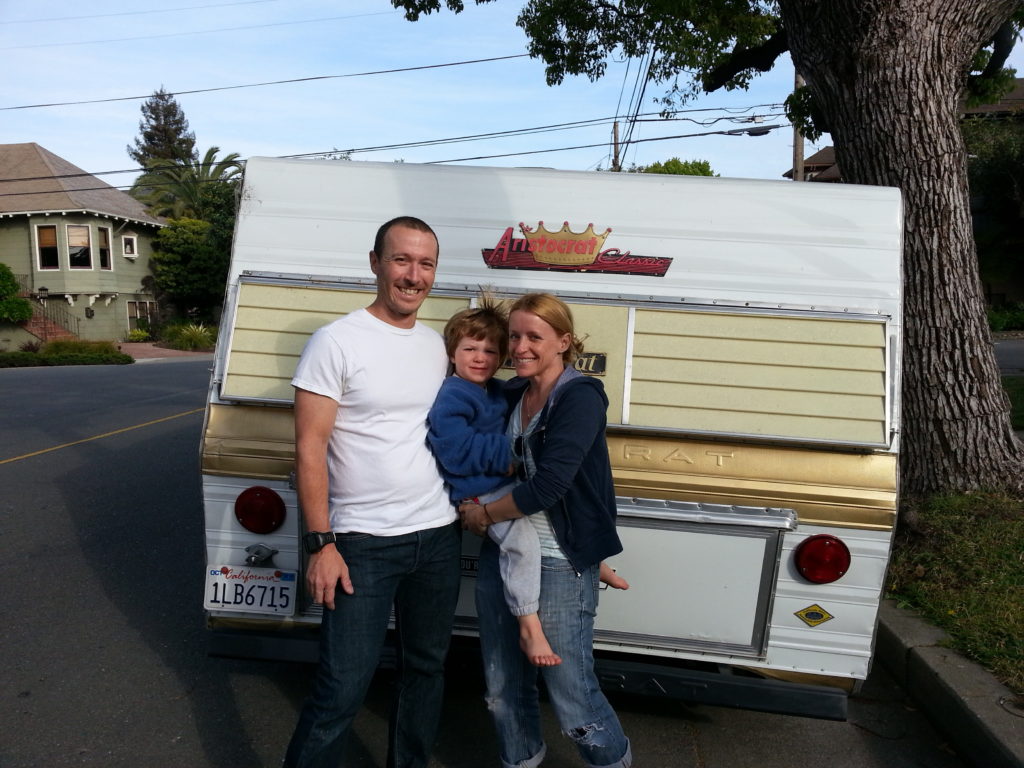 There, they chipped away at that bucket list. Teresa volunteered at a dog shelter and fulfilled a dream of creating costumes for a local theater. In addition to skills as a web designer, she’s also a proficient seamstress. Michael used his extra time to put energy into fitness. He entered multiple races and competed as a semi-professional cyclist and triathlete. Their son worked on growing up with two engaged and present parents. 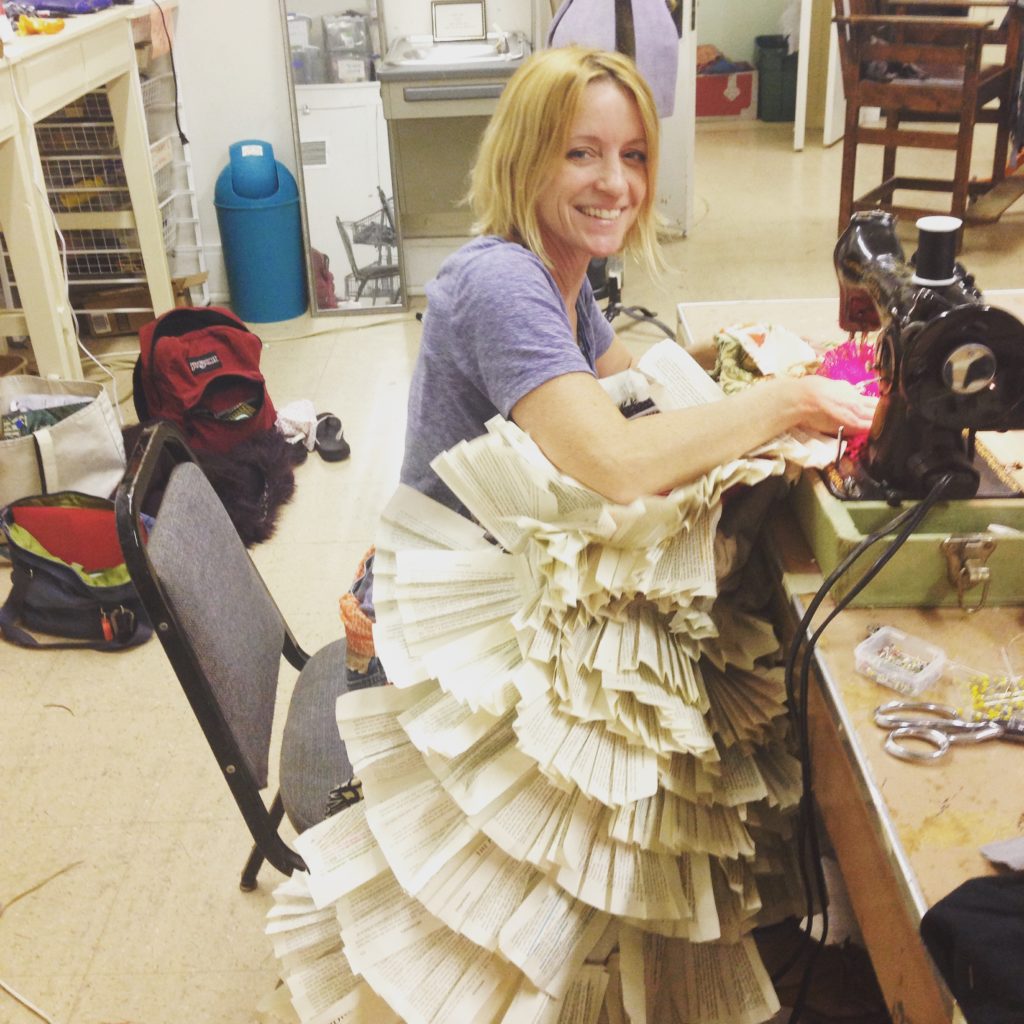 Teresa at work creating costumes for a local theater in Austin, Texas.

Meanwhile, Michael was learning about travel hacking. He found the site Million Mile Secrets to be particularly helpful. After their stint in Texas, they embarked on their next dream to travel the world with no planned itinerary.

Armed with a long list of travel hacks (which Michael admits took a lot of time to research and accomplish), they flew to Europe. They started in Austria for a race that Michael had qualified for. After that, they did a WorkAway stint on an olive farm in northern Tuscany. They really loved the model of integrating work into their time away. They put in a few hours in the morning and had the afternoons and long weekends to explore.

Slowly, at their own pace, they made their way around the world, staying longer in places they enjoyed more. In some cases, they even stayed long enough to enroll their son in school. Ultimately, they landed in Ecuador. With their son of kindergarten age, they decided they’d enroll him in a local school. If it worked well for him, great. If not, they’d spend one more school year wandering about South America and then head back to the States. Luckily, their son is thriving in his bilingual school in Cuenca and they are there to stay. For now. 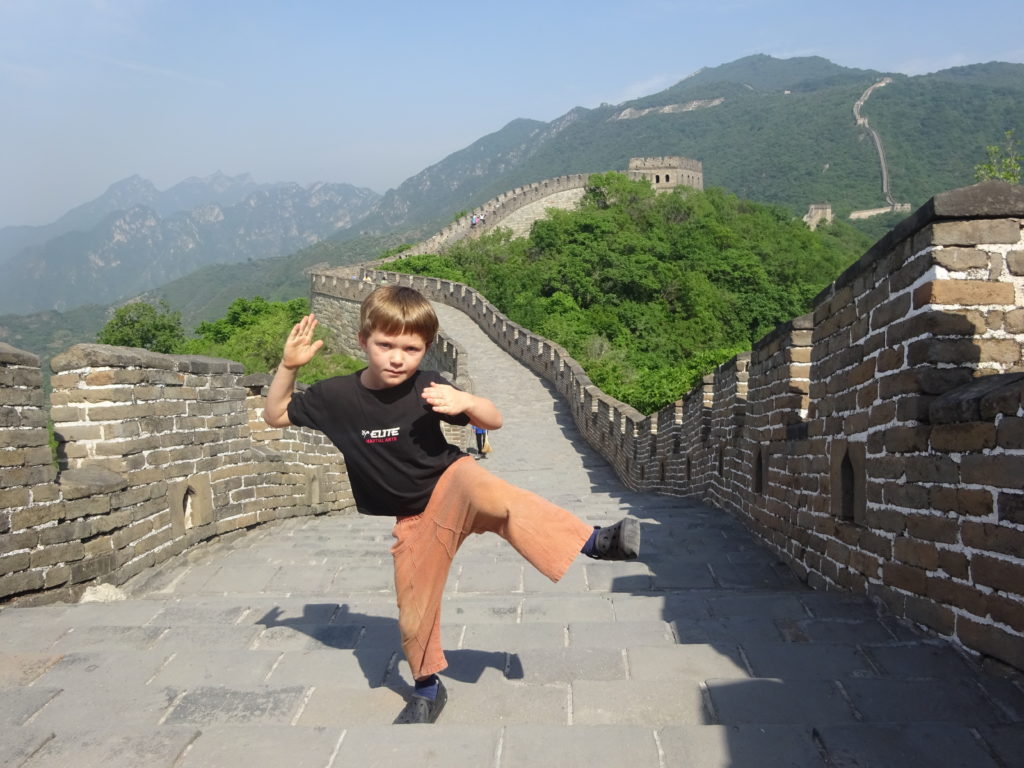 Practicing some martial arts on the Great Wall of China. Obviously.

So what advice do Teresa and Michael have to share with others interested in pursuing their own version of an uncommon dream? First, Michael emphasized “we’re not unicorns.” Anybody could do this. For them, it was about saving aggressively and liquidating their overpriced lifestyle in San Francisco. As Teresa explained, “I live like I don’t have a lot of money. But I live like I want to live. I’m happy.” 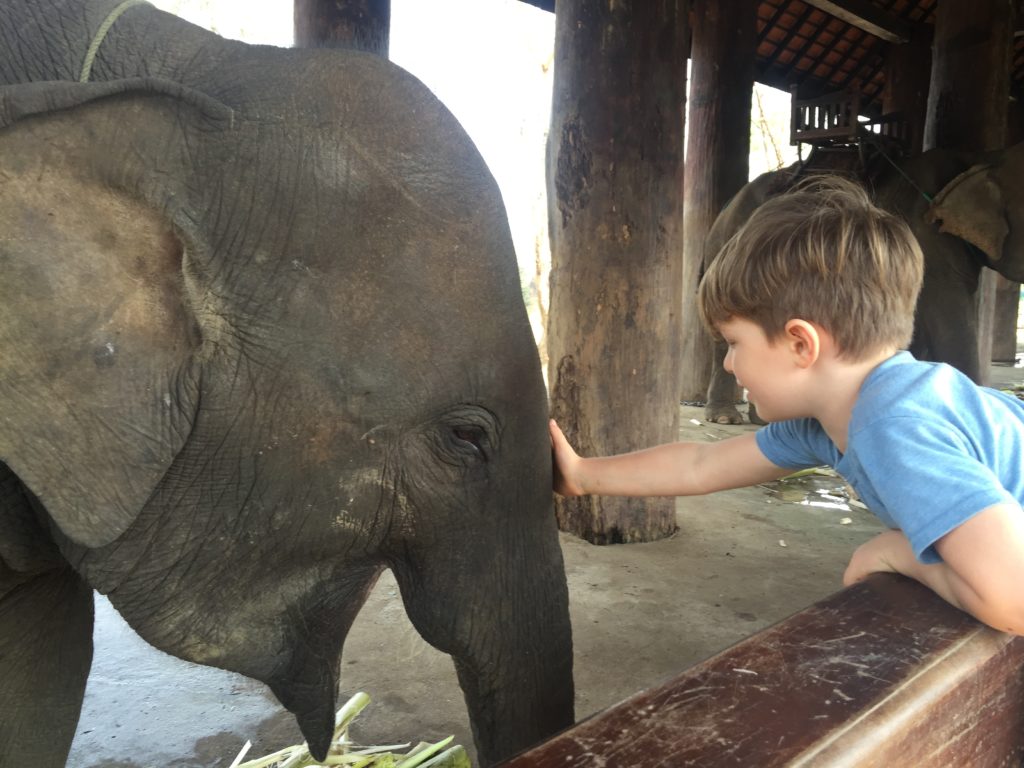 Shouldn’t every kid get to pet an elephant?!?

Michael is happy to discuss how they managed to reach early retirement to anyone who asks. He explains that it’s really not about dollar amounts. It’s about savings rate. If you save 50% of what you make, you only need to work for 17 years. If you can save 75% of of what you make, you can be done within 7 years. It’s clearly explained in the Mr. Money Mustache article, “The Shockingly Simple Math Behind Early Retirement.” 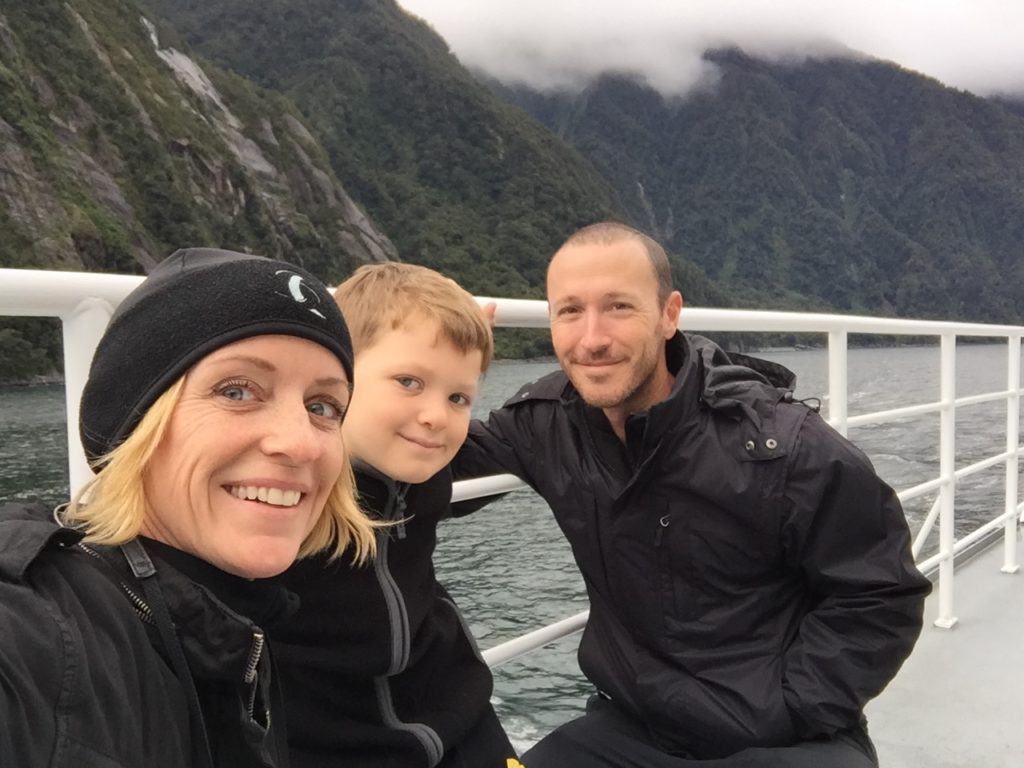 Michael also shared that his next goal is to get their money fully invested. They started their financial independence with all cash. Admittedly, they found this to be very comforting, but also acknowledge that the money is not making them anything. Michael, however, feels that stocks are currently overpriced, and has been concerned about investing directly behind what he believes to be an inevitable burst of the stock market bubble. He shares that this idea of the “sequence of returns risk” is well described at kitces.com.

They suggest that anyone pursuing this path maintain assets that are liquid. As Michael put it, “ be light and nimble.” In their case, much of their assets were tied up in real estate (their personal home and a house they inherited from Teresa’s father). They felt locked into their situation until they were able to sell off their excess “stuff”. Had they been more liquid, they would have appreciated retiring a couple years earlier. To help with this, they suggest we separate our wants from needs. You need a lot less stuff than you think. With fewer things weighing you down (figuratively and literally!) you have more flexibility to attain that light and nimble state they wished they had had earlier on.

They also discussed how helpful it was to have a date or event directing their actions. When they finally packed up and sold their home in California, they were aiming to make it to a family reunion in Texas. Kicking off their world travels was the race that Michael had entered in Austria. Without a clear line in the sand, they admit it’s too easy to get stuck waiting just a little bit longer.

And, they share that traveling while kids are still young is ideal. (Yay, us!) When kids are older, you’re either tied to the regular school calendar or have to provide some sort of homeschooling. Not having to follow the regular school schedule also allows for travel during the seasons when places are less expensive and less crowded. Although Teresa and Michael have less flexibility for year-round travel now that their son is in regular school, it has helped to anchor them in the Cuenca community where they are connected and happy. 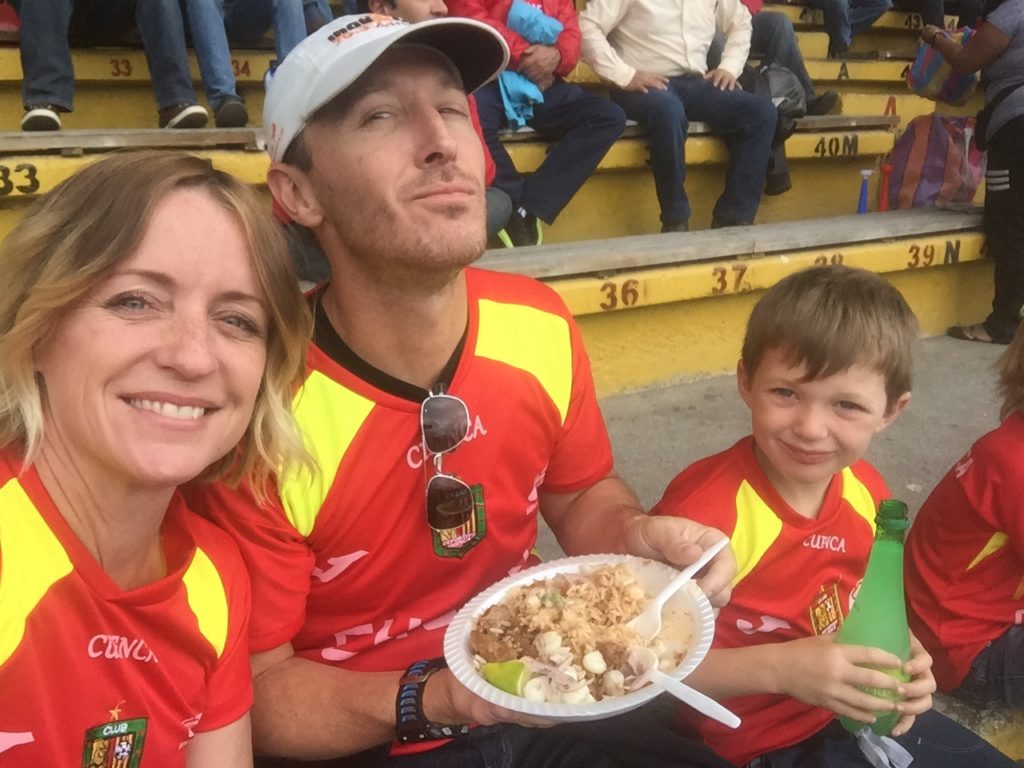 Taking in a Cuenca fútbol game.

So, why not let this be a lesson to all of us? Even ordinary people can live extraordinary lives. Take the risk. As Michael explained, chances are that failure looks fine too.