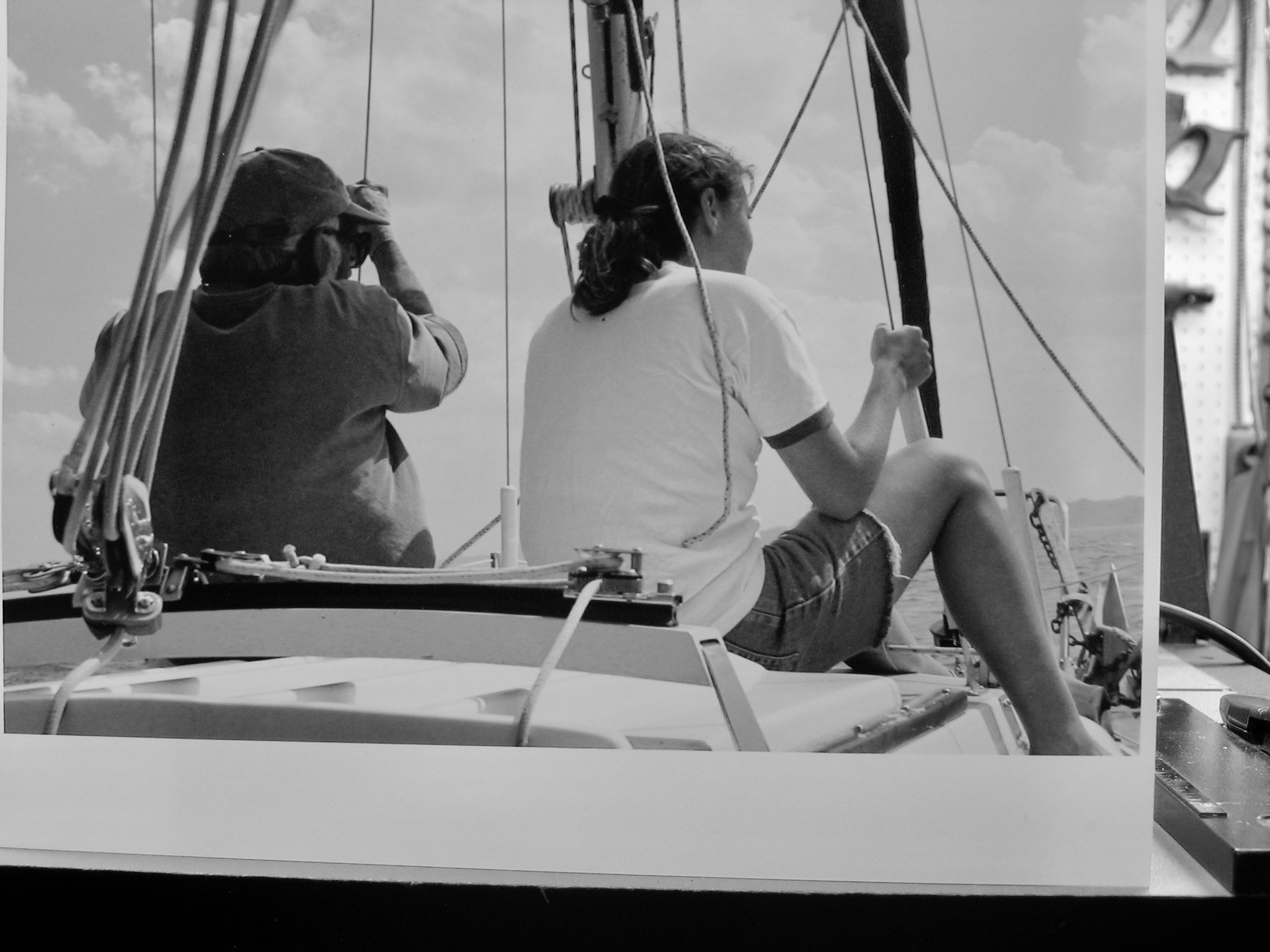 My grandfather was super special. Kind, gentle, mischievous, adventurous, incredibly loving, and so darn smart. He had a sparkle in his eye and an easy laugh. People didn’t just like him. They adored him.

Growing up, I was no exception. I just loved my grandfather so much. My grandmother (also incredibly special in so many ways) and I had a running joke. My grandfather would have just finished making a silly comment or scooping way too much ice cream into my bowl and she’d look at me. “He’s not perfect, Ellen. He’s close, but he’s not perfect.” “No, he’s perfect,” I’d always say. 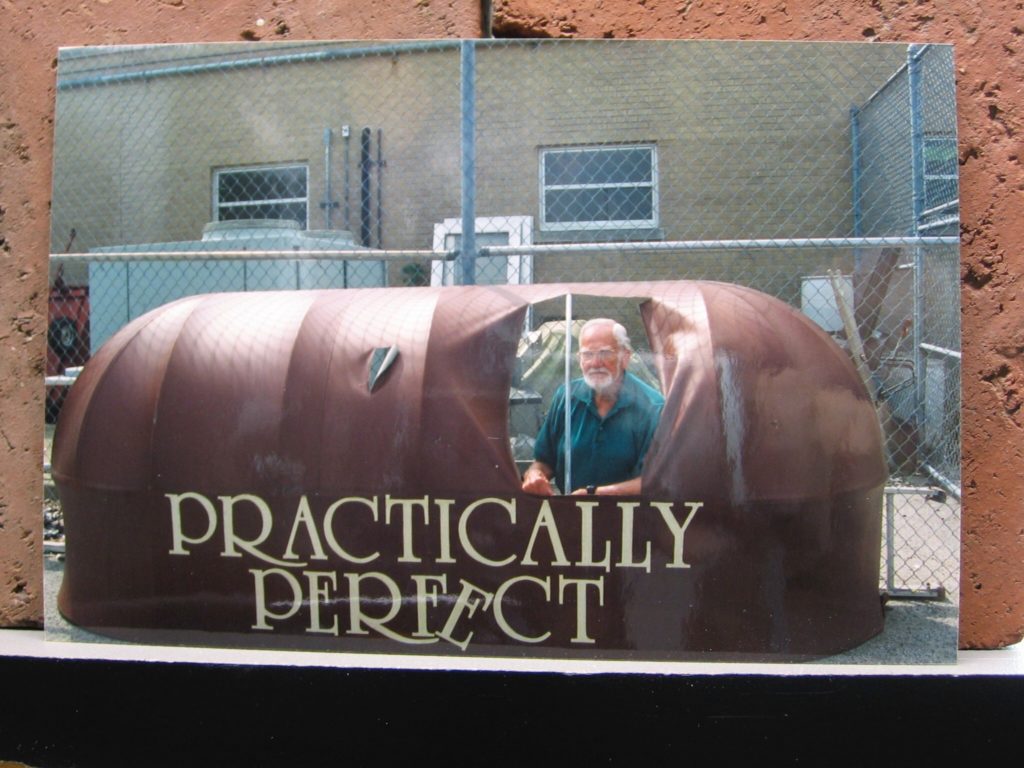 My grandfather found this broken awning behind the building where he was volunteering. He had someone take this picture and then put it in a frame for me.

He is our inspiration for Uncommon Dream.

A Quick History of my Grandfather’s Uncommon Dream 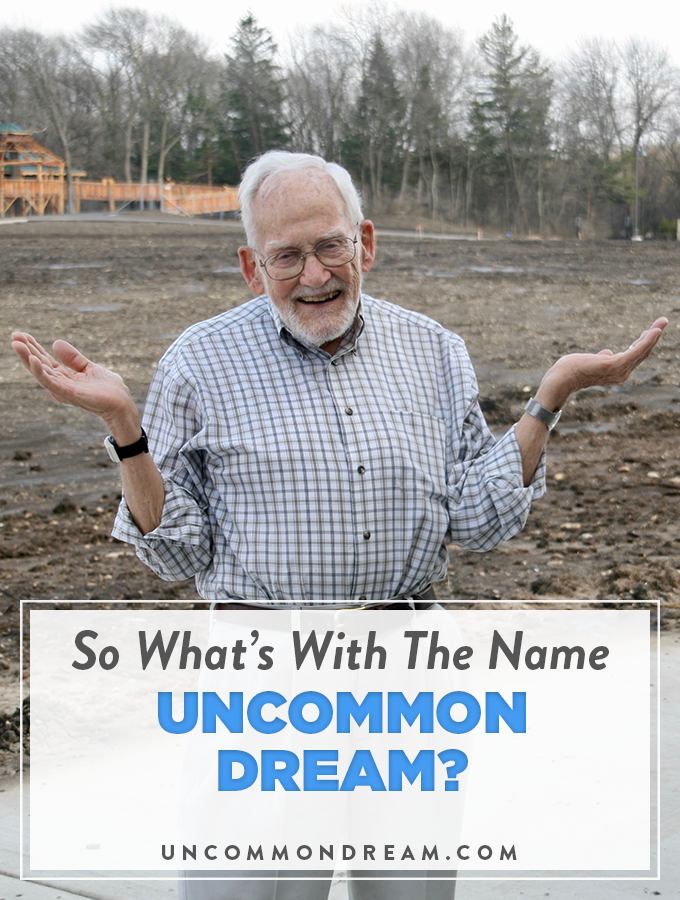 My grandfather grew up outside of Chicago. He met my grandmother in school because he had the divine fortune of having a last name that directly succeeded hers alphabetically. He sat behind her and pulled on her hair. He was shy and needed a way to let her know he liked her.

Like most young men at the time, he joined the military and went overseas during World War II. He recalled his time as a merchant marine with great affection, seeing the entire thing as one great adventure. His ship was often shot upon by enemy forces and instead of running for cover, he’d leave the engine room where he worked to get to the deck and watch it all unfold.

Back home, my beautiful grandmother had many “beaus” and occasionally went on dates with young men from the nearby military base. My grandfather, who lived in the same neighborhood, would wait for them to drop her off and then drive them home. I guess he just wanted to make sure the date was good and done.

Although my grandmother said she wrote to many “boys” overseas, it was my grandfather who won her hand in marriage. She claimed it was the wavy golden hair. All of it was pretty much gone by the time I entered his life, but I’ve seen pictures. He was definitely handsome.

After the war was over, my grandparents lived a solidly suburban life outside of Chicago. My grandmother worked as a nurse. They had my mother, their only child. My grandfather, not one willing to work for anyone else, started his own company.

My grandparents with my mother. In 2005 while downsizing their home, my grandfather took digital photos of all of the photos they wanted to keep. He staged them all against stacks of bricks and such in his workshop.

Cox Automation. It’s still going strong today. Although he had sold it when I was quite young, it still played prominently in my childhood. We always attended the annual company picnic, and my brother had his first real job there just out of high school.

Since it was in his retirement years that I really got to know my grandfather, that is when the story of who he was really begins for me. There was so much about him and my grandmother that strongly influenced who I am and who I still hope to be.

My grandfather was not a man who liked to sit still. He used to go for walks, looking for the most obscure paths through the woods he could find. One of my favorite memories is a day when he brought my brother and me to an abandoned home he had found. We walked through the rubble, picking up old black & white photos and imagining the life of the people who had once lived there.

In their retirement, my grandparents took up scuba diving. My grandmother loved hot tropical places and I think it may have been my grandfather’s way of enjoying those places too. I think they finally stopped when my grandmother lost hearing in one of her ears during a dive.

In addition to their scuba travels, my grandparents loved to explore other parts of the world. I have a collection of photos from when they visited Ireland, England, and Scotland when my mother was a girl. She passed away when I was 18 and I felt an intense connection to her when I traveled in my 20s and found myself in some of the same places from the pictures. Most notably, I hung upside down to kiss the Blarney Stone in Ireland because of the photo I have of her and my grandparents doing the same.

But what epitomized my grandfather’s love of adventure the most was his 26ft sailboat. Uncommon Dream. He bought it right around the time he was forced to sell his company. My grandmother encouraged the purchase as a way to pull him out of a pretty serious rut. 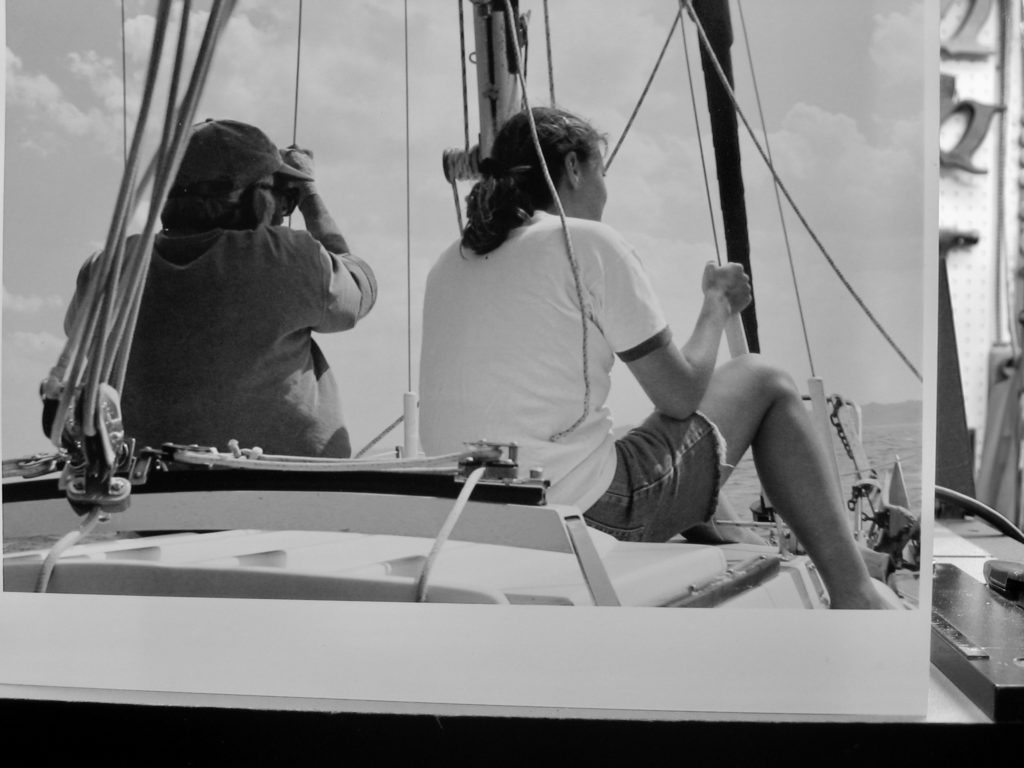 But she hated the damn thing. In fact, she kept a pillow prominently displayed on their bed that said, “I love my husband, but I hate that damn boat!”. I still have it packed away in a box somewhere.

My grandfather, though. He loved that boat. It provided for him the freedom, adventure, and physical “puttsing around” that brought him the greatest fulfillment. He often took my brother and me out for trips on Lake Michigan. I hated windy days when the boat would keel heavily to one side. I’d sit white knuckled while my grandfather would smile serenely from the helm.

My grandparents had been married for over 65 years before they passed away. I’m sure they had plenty of struggles over the years, but the only thing I ever witnessed was the sweetest, most affectionate and authentic love for one another.

They always held hands. They still cuddled on the couch. And my grandfather absolutely insisted that my grandmother not lift a finger when it came to clearing the table or doing the dishes. 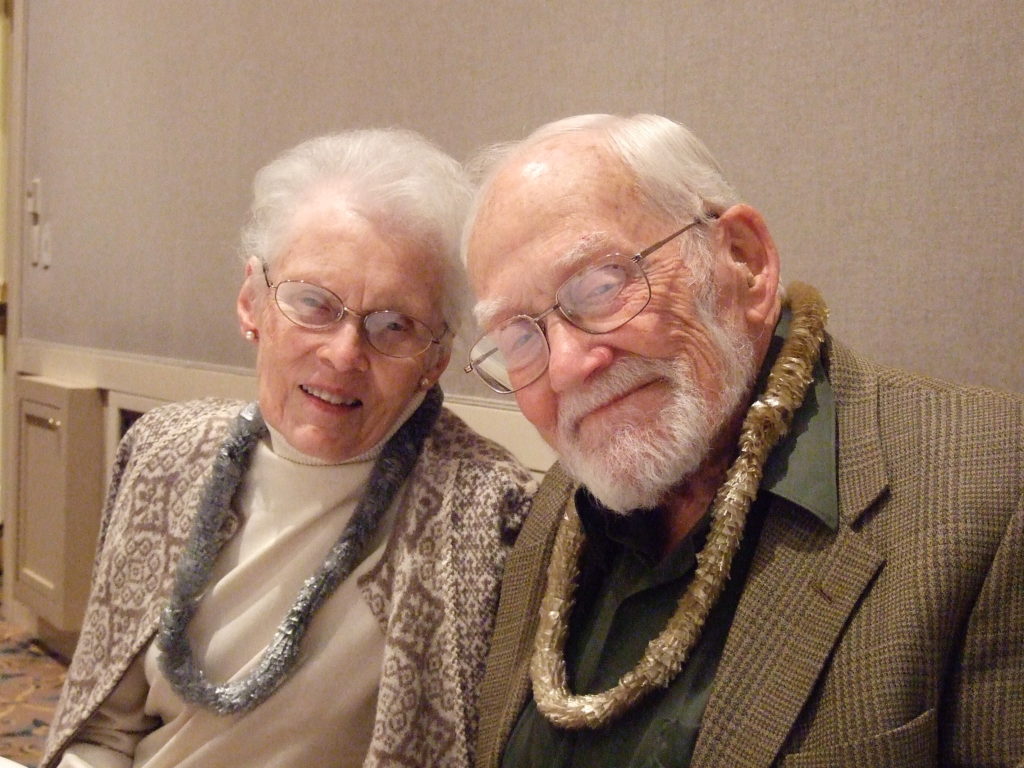 When my grandmother passed away in 2009, my grandfather was anxious to join her. Unbeknownst to us, he invited the pastor who had officiated her service over for dinner shortly after her funeral. He matter-of-factly informed him that he’d be needing his services again soon. Although his body didn’t cooperate as quickly as he would have liked, it was less than a year later that he passed away as well.

I’m so grateful they had an opportunity to get to know Michael over the years before they were both gone. I remember my grandmother pulling me aside as we were saying good bye after their first meeting. She whispered in my ear, “you’re the girl who marries someone just like her grandfather.” It was one of the most beautiful things she’s ever said to me.

My grandfather was incredibly kind. He had a quiet way about him that put others at ease. His default was to find the underdog and lift them up first.

A good example of this was his very best friend, a man who was a bit younger than my own father. This man first met my grandfather when he was just 15 or 16 years old and was looking for a job. He was responding to an employment ad he saw in the newspaper and accidentally knocked on the door of Cox Automation, which was next door to the business that had listed the ad.

My grandfather liked him immediately and hired him to work in the shop. That young boy grew up to become the president of the company, even after it was sold. He spoke at my grandfather’s funeral, and I don’t think I have ever laugh cried so intensely before in my life. The two of them shared a love of adventure and their stories always ended with my grandfather telling him, “let’s not tell Virginia about this.”

Another example of my grandfather’s sincere kindness was his volunteer work in retirement. He began working at a center for adults with mental disabilities. He created a woodworking shop where they were able to use the equipment to successfully complete projects like clocks and frames. He spent hours crafting special devices to allow them to use the machines safely.

He loved his clients at that center. They were his friends, and they absolutely adored him. He genuinely enjoyed the time and the people.

So Why Uncommon Dream?

If one advances confidently in the direction of his dreams, and endeavors to live the life which he has imagined, he will meet with a success unexpected in common hours. -Henry David Thoreau

My grandfather loved the above quote and named his sailboat with intent. Although in many ways, he did live a life quite ordinary, he did what he could to make it extraordinary.

He was for us a great example of the people we aspire to be. Adventurous, loving, kind. With him and many other loved ones in our life, we stand on the shoulders of giants. We are reaching for even greater heights and seeking out even greater triumphs as we build upon our understanding of the experiences they’ve passed on to us.

It’s true that a life of financial freedom, travel, and mindfulness is not all that uncommon of a goal. But it does take an uncommon approach to get there. It would have been so easy for us to live our lives just a little more ordinary – taking out the largest mortgage loans the bank would allow, buying the newest and greatest of everything, driving fancy gas-guzzling cars, etc.

We have, however, been mindfully taking a less common approach. Meaningful decisions have led us along a path that has brought us here. In our 30s, free of financial insecurity, traveling, raising our two children, and living our uncommon dream.

We have created this site in hopes that it will allow us an opportunity to reflect on our approach to life. We hope too that it will serve as a resource for others who are looking for ways to take a path less frequently traveled.