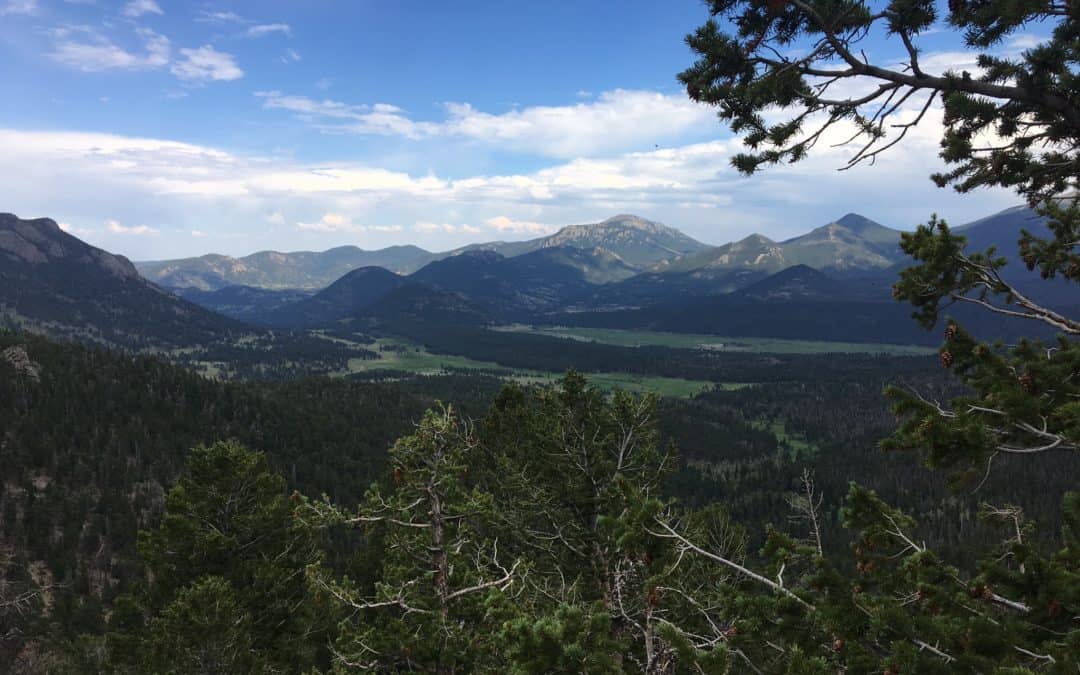 Last summer, we bought an old RV for $12,000 so we could take a month long road trip to the Pacific Northwest. This summer, we sold that RV for $14,000. I’ll share more details about the RV itself next week, but the trip was a big one for us so we wanted to recap that adventure here.

Everywhere we visited on this road trip was completely STUNNING. This country of ours is so darn gorgeous. We were celebrating 10 years of marriage and wanted to get ourselves back to Scenic Beach State Park where we had our wedding ceremony.

To get there, we drove (in our RV AND our Prius) through Rocky Mountain National Park, The Grand Tetons, Yellowstone, the Flathead Valley in Montana, Spokane, and finally to the Hood Canal of Washington state. Most of these are places everyone should see. 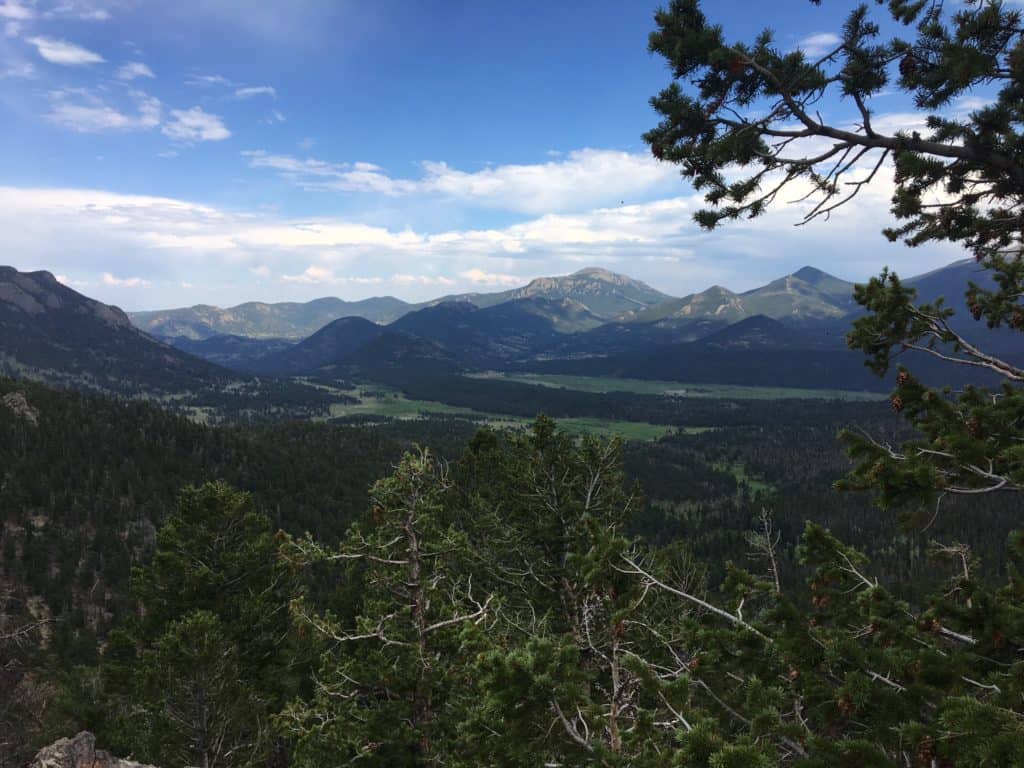 One of the gorgeous, expansive views from Trail Ridge Road in Rocky Mountain National Park

This wasn’t actually part of our road trip. The week before we left, we had a family reunion in Estes Park and made a couple day trips into the park. That was when Michael and I did some much-needed life planning while the kids were being cared for by their loving grandparents.

If driving the infamous Trail Ridge Road, it’s supposed to be less crowded in the late afternoon when most people have already headed home. That’s when we went and it wasn’t bad at all. It was also a weekday. There are also many scenic overlooks to stop at along the drive and take in scenery like this. 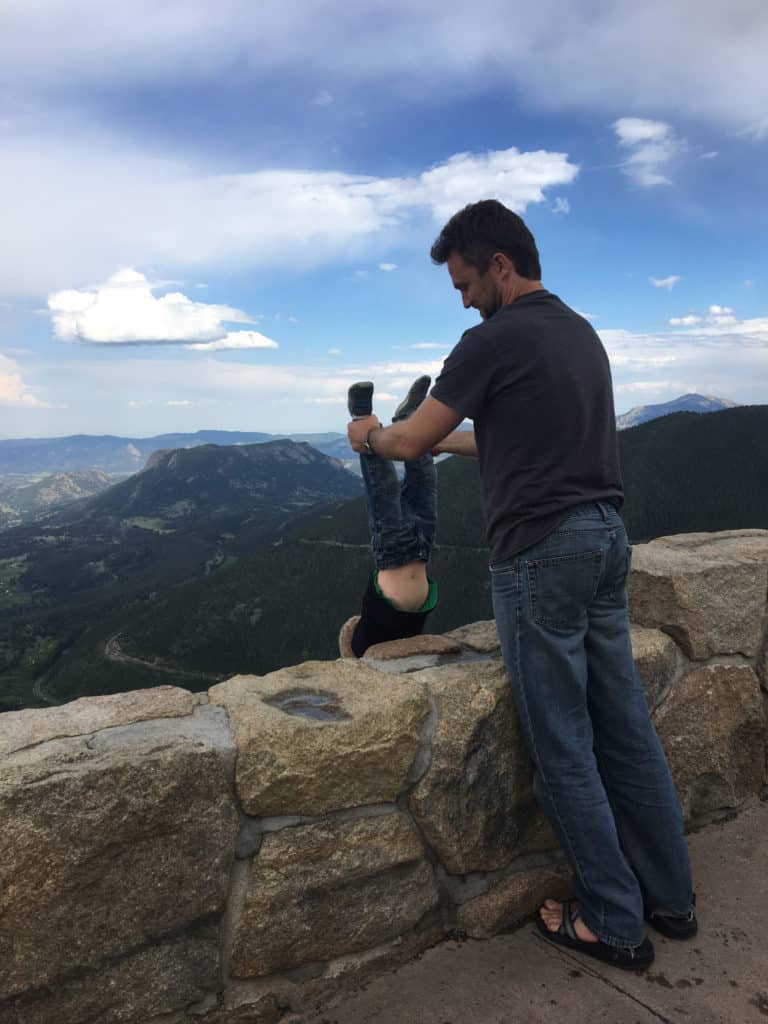 Michael loves a good optical illusion! Leo is completely safe and maybe 14″ above the ground on the other side of this wall.

Rocky Mountain National Park is so beautiful. And so busy. If visiting on a weekend (or during the week in the summer), the best bet is to just count on getting around the park on one of the shuttles they provide. 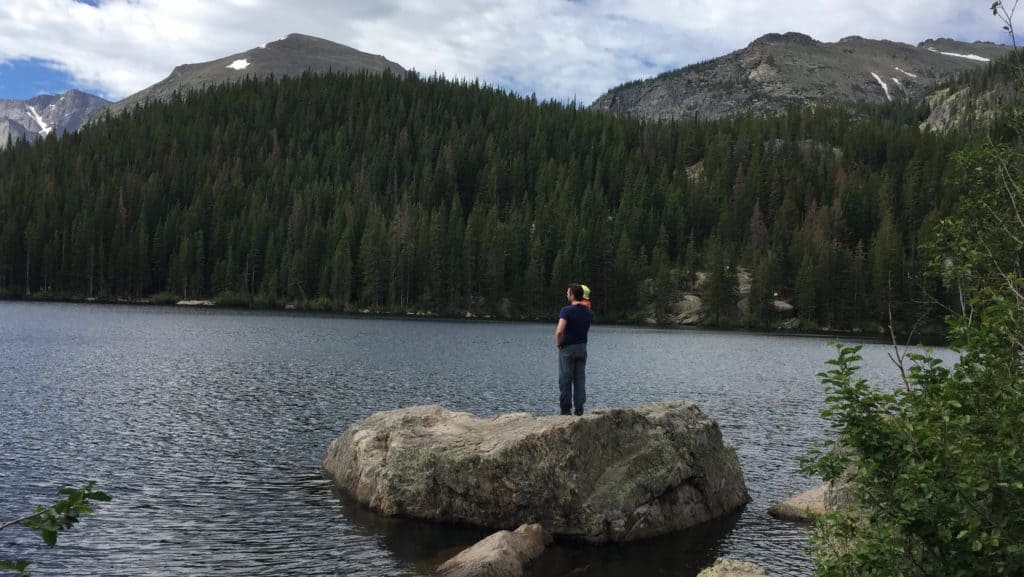 Michael almost fell in the water leaping to this rock. Leo was precariously handed over by Gramps. Well worth the picture. 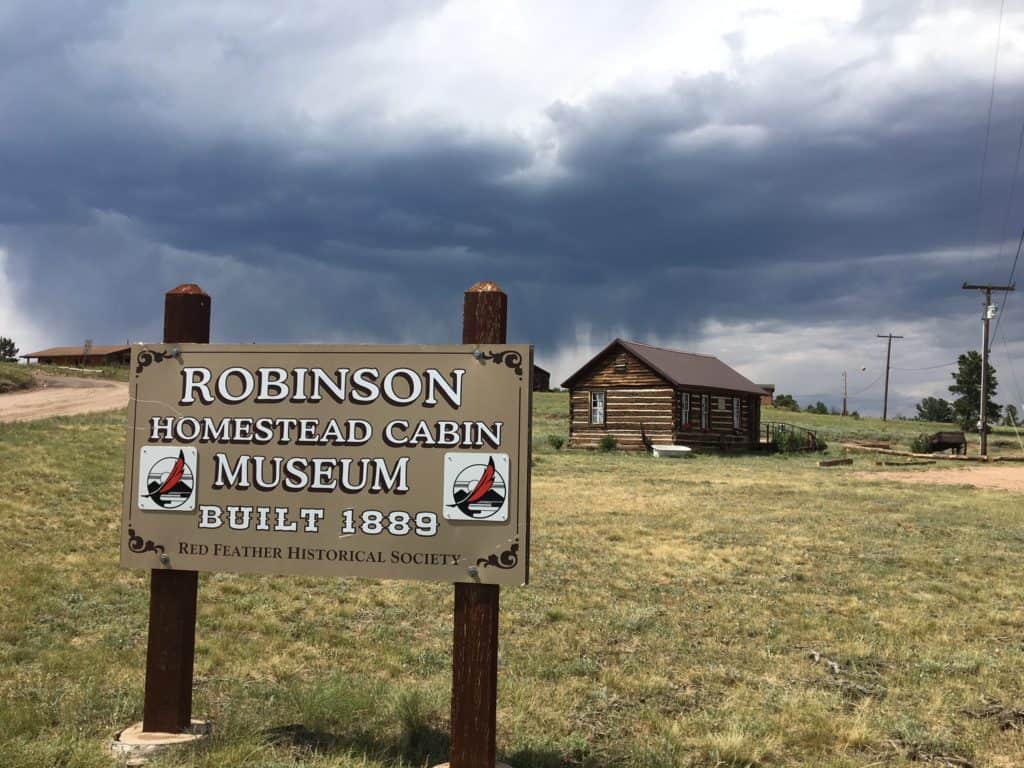 Michael’s great great grandfather’s homestead cabin. We hung with family in Red Feather Lakes, CO for a couple nights (breaking in our RV at a local campground) before officially starting off on our trip. 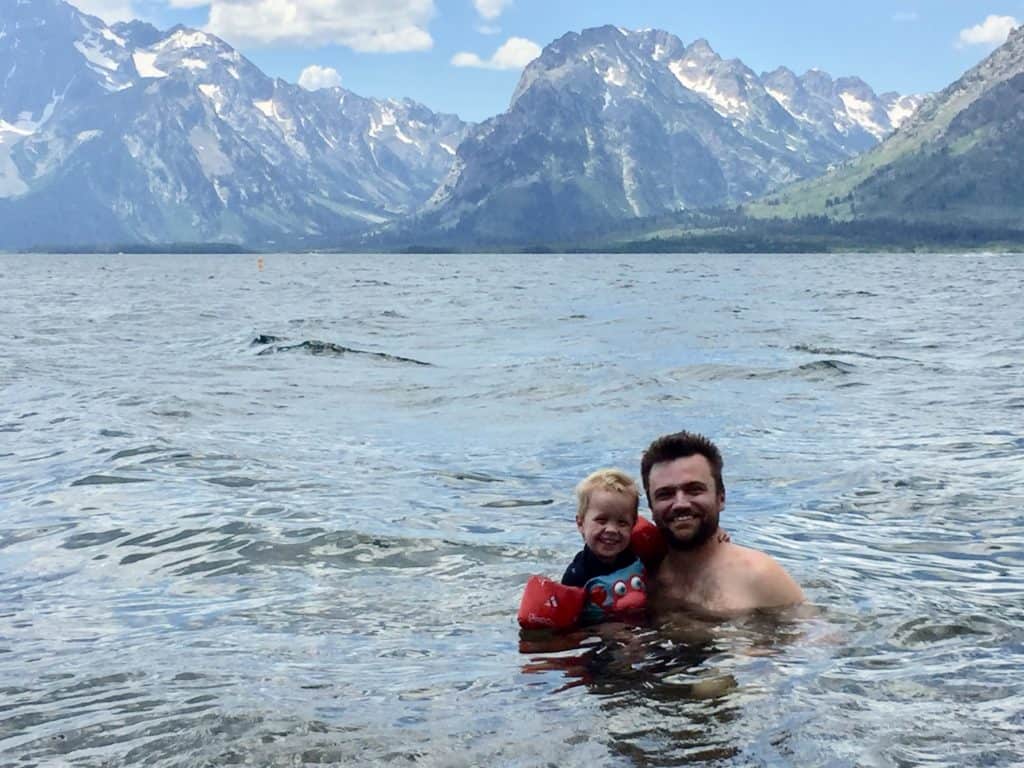 I promise that backdrop is real. It is THAT beautiful!

This place should be on everyone’s bucket list. The peaks of the Tetons are absolutely breathtaking. We stayed at the Colter Bay Campground where we were able to get a site without a reservation. 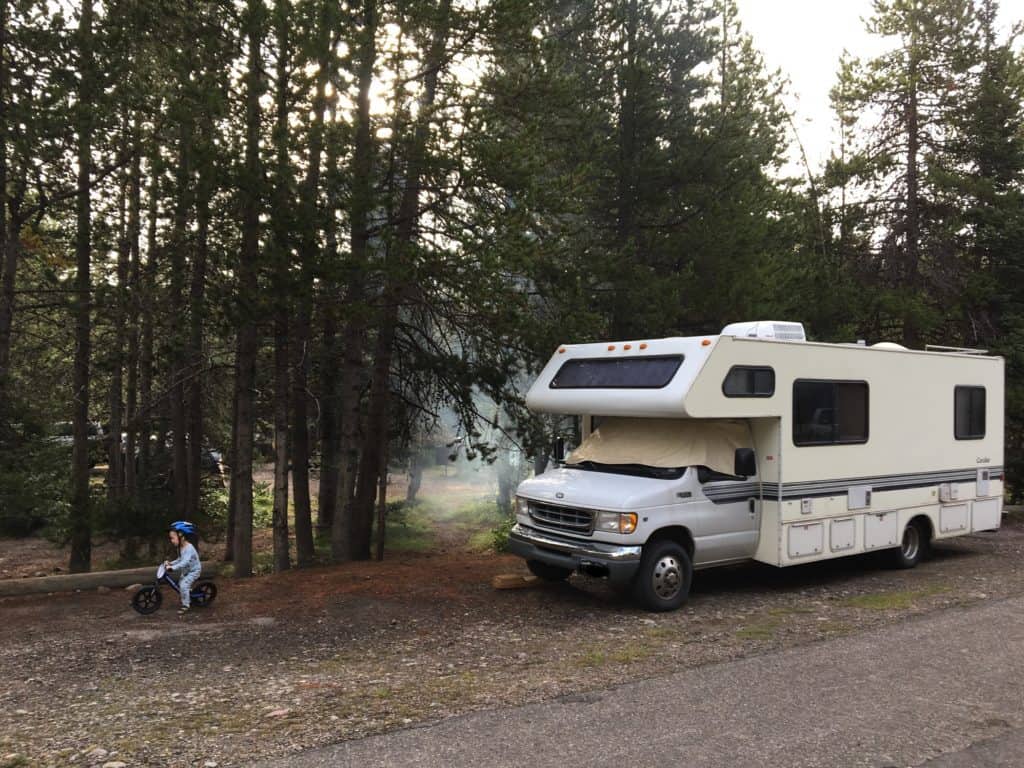 Our Tetons campground site. Leo really figured out how to cruise on that glider bike of his, weaving in and out of the trees.

We probably missed out on tons of awesome hikes because we just weren’t up for anything strenuous with two kids who can’t yet hike on their own. But, we had a really pleasant walk around the lake at the visitors center, and the rock beach was perfect.

We used The Tetons as a base for driving in to Yellowstone as well (about 20-30 minutes from where we were to the south entrance). 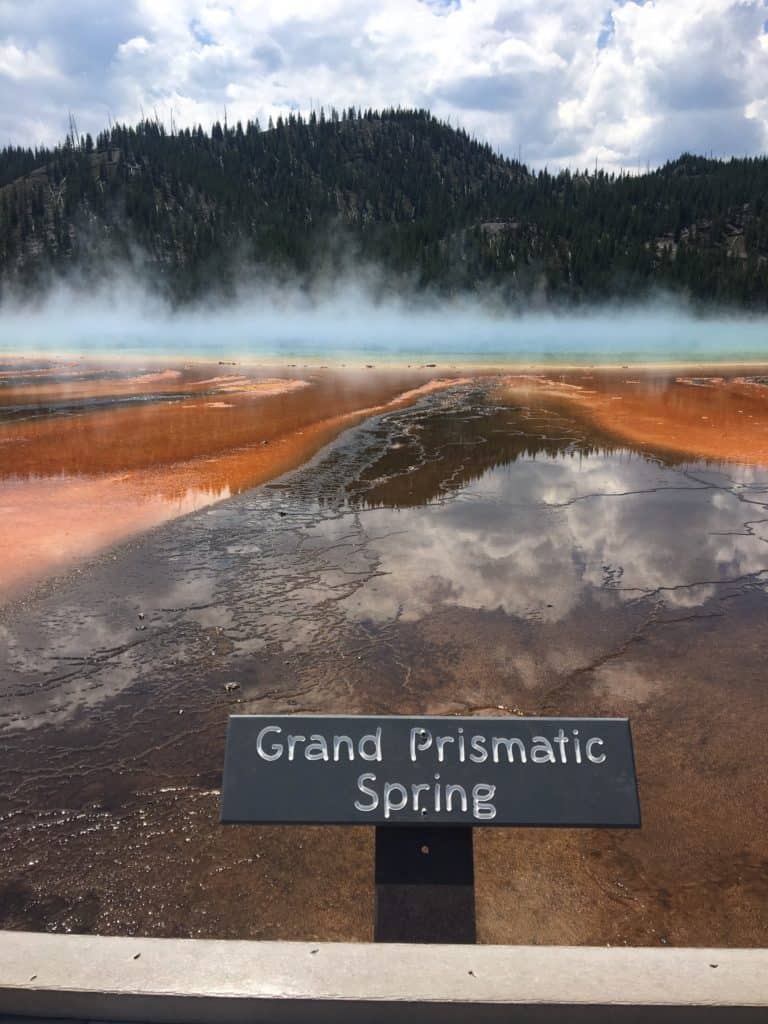 Yellowstone. It is just so cool and deserves way more time for exploration than we gave it. 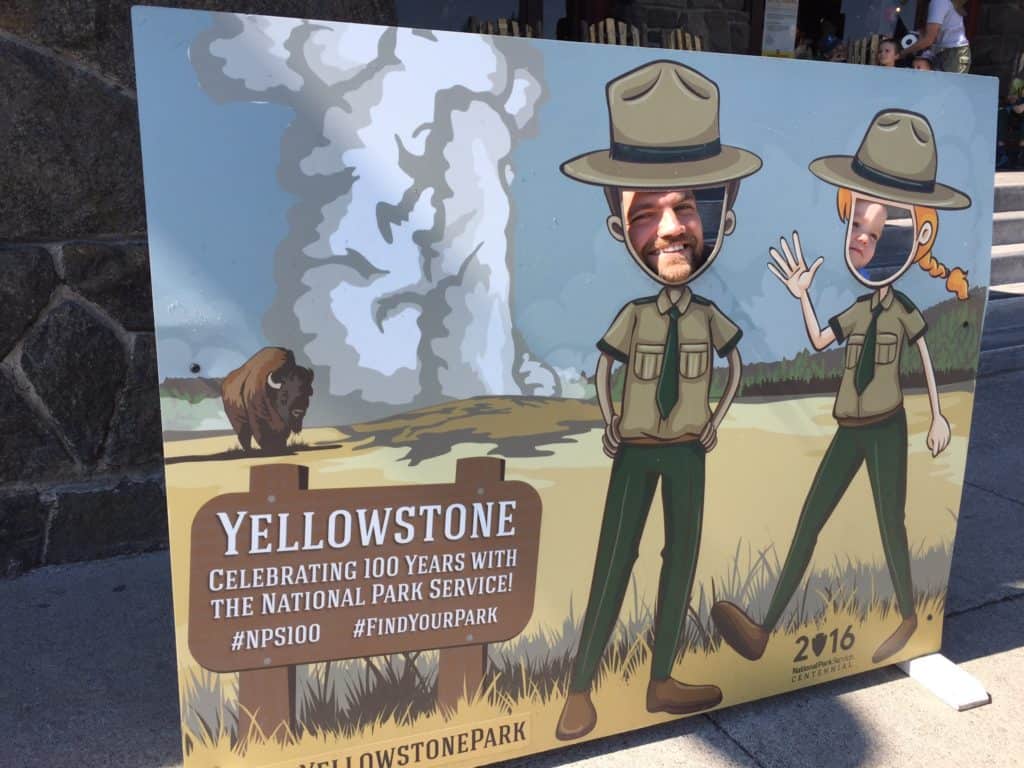 We are not above a cheesy tourist photo op. 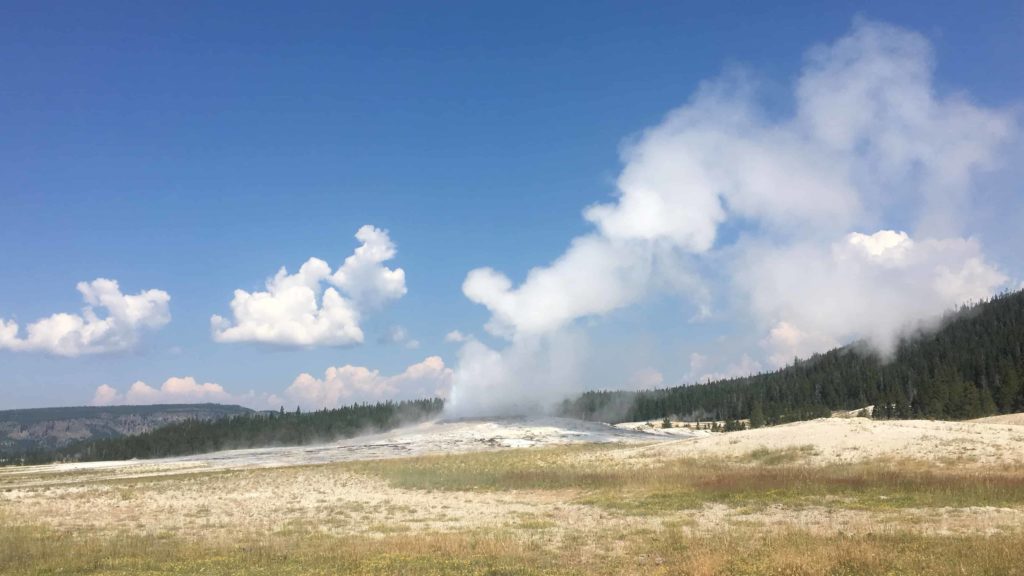 Unfortunately, we were there at the height of the fire season, and the smoke in the air blocked any real view of mountains. I’ve heard great things about Missoula, but we just stayed a night in the KOA campground and hung about a bit in the town before heading north toward Flathead Lake. 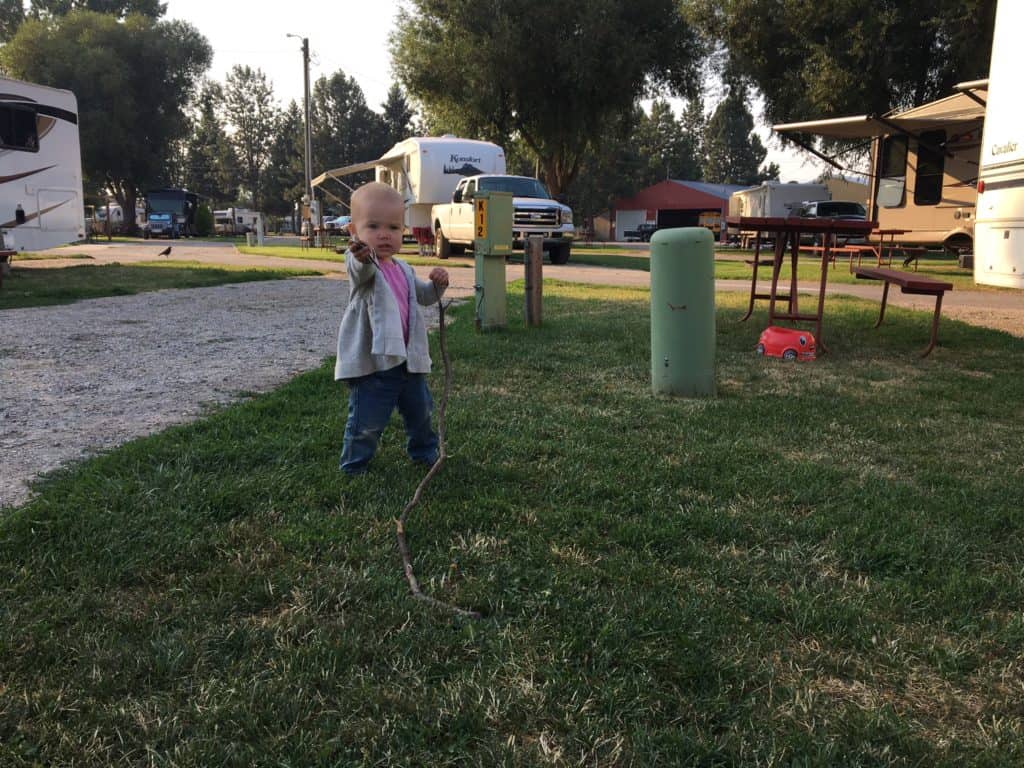 KOA “Campground” Oh, hello neighbors… there are so many of you so close to us! It was good to get some laundry done, though.

As a side note, we found the KOA to be helpful for proximity to the city and access to laundry. Otherwise, it felt an awful lot like camping in a parking lot.

We made the trip up to Flathead Lake (it’s about an extra 1-2 hours north of I-90) because good friends of ours were housesitting in Big Fork. Michael had also driven through the area once for work years before and always wanted to return. 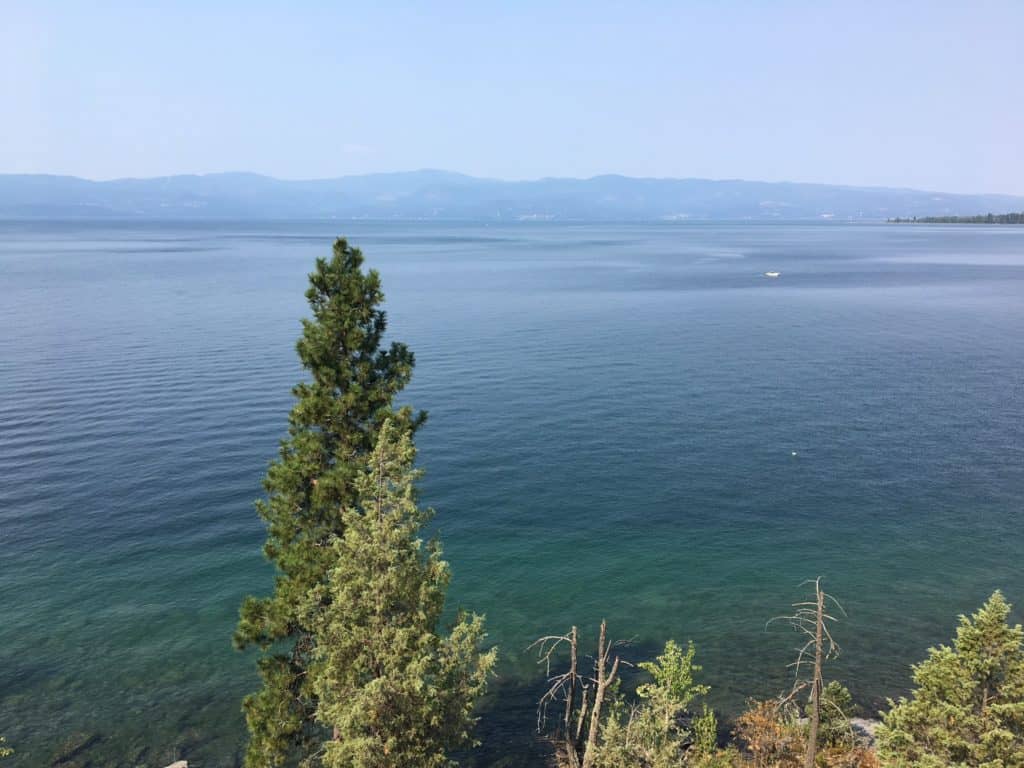 Flathead Lake in Montana. The view was unfortunately obscured by all the smoke in the air from nearby fires. It was still stunning, though.

We stayed at Wayfarers State Park and were really lucky to get the only open non-reservable spot. We were there just a few nights and spent most of our time swimming and catching up with our friends (who didn’t know it at the time but would be busy with twins by the next summer!) 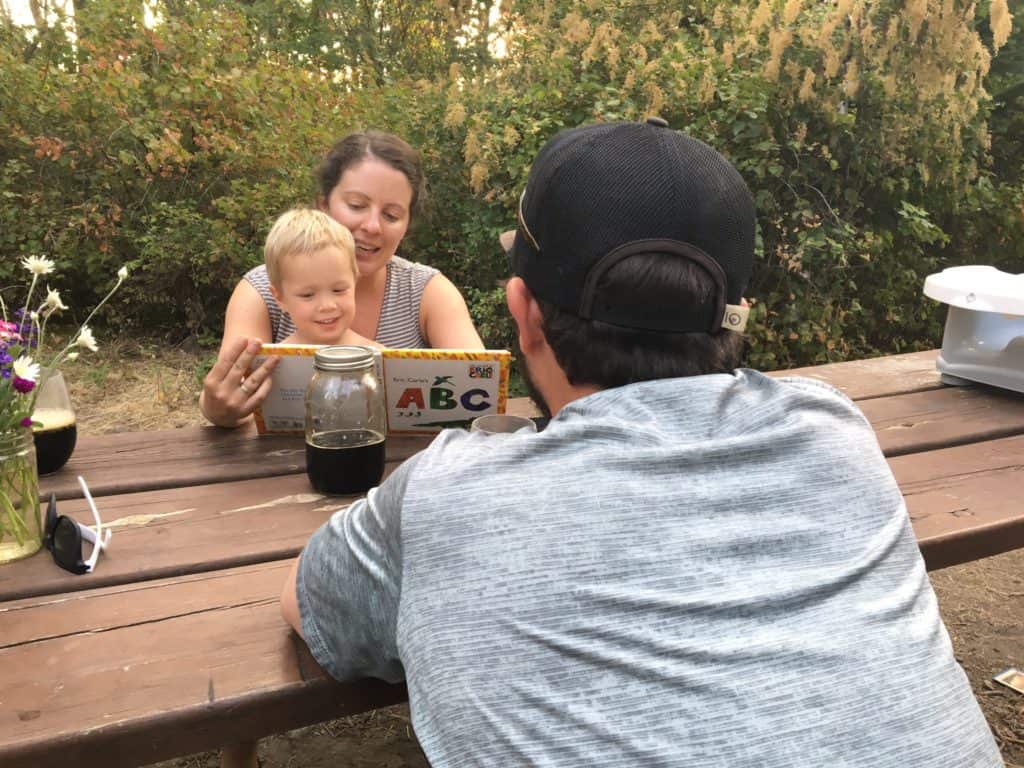 It’s the simple things that make these trips so worthwhile. These friends are some of our very favorite people and a few golden days with them were completely worth whatever whining, crying, or screaming that got mixed into the getting us there. That’s beer from a local brewery in that mason jar. 🙂

We were also lucky enough to meet and spend an afternoon/evening with the Montana Money Adventures family. They joined us at the state park for some swimming and then Jillian graciously had us over for a dinner of cherry-filled pancakes. Adding our family of 4 to her family of 7 was no small endeavor and we really enjoyed getting to know them. 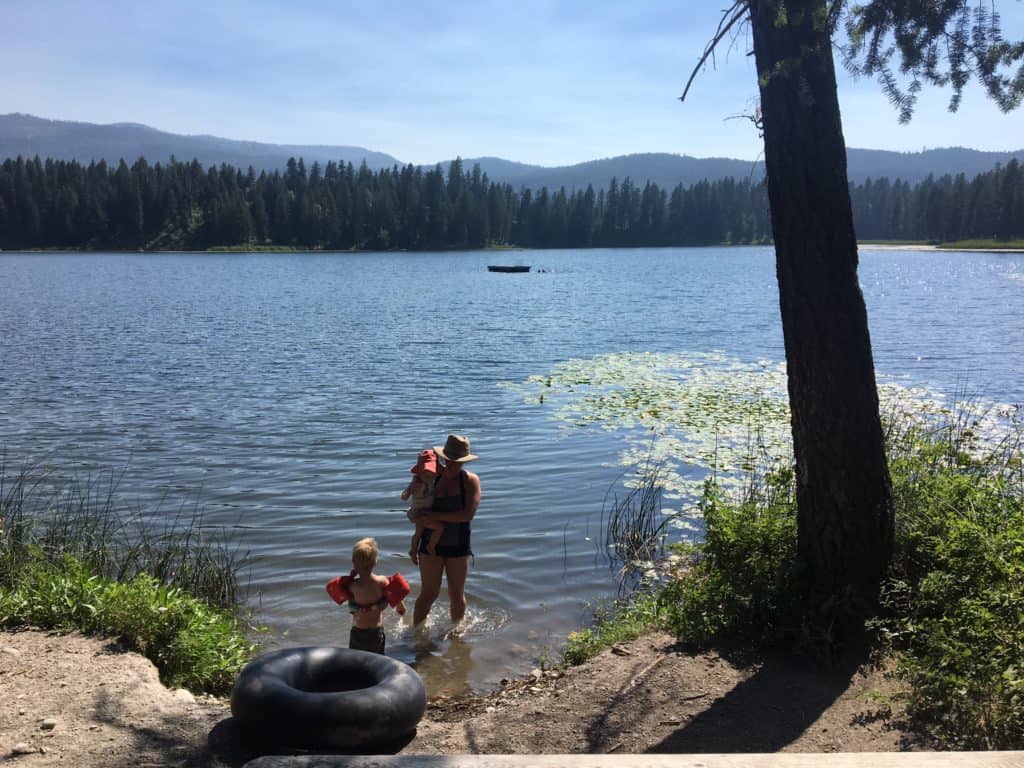 Later that fall, Jillian and Michael both attended FinCon together and she ultimately included our FI story on her site.

Our stop in Spokane was just for a couple nights, but included a really nice visit with Michael’s aunts who live in the area. We parked the RV on one of the aunt’s driveway and she took us around the area. 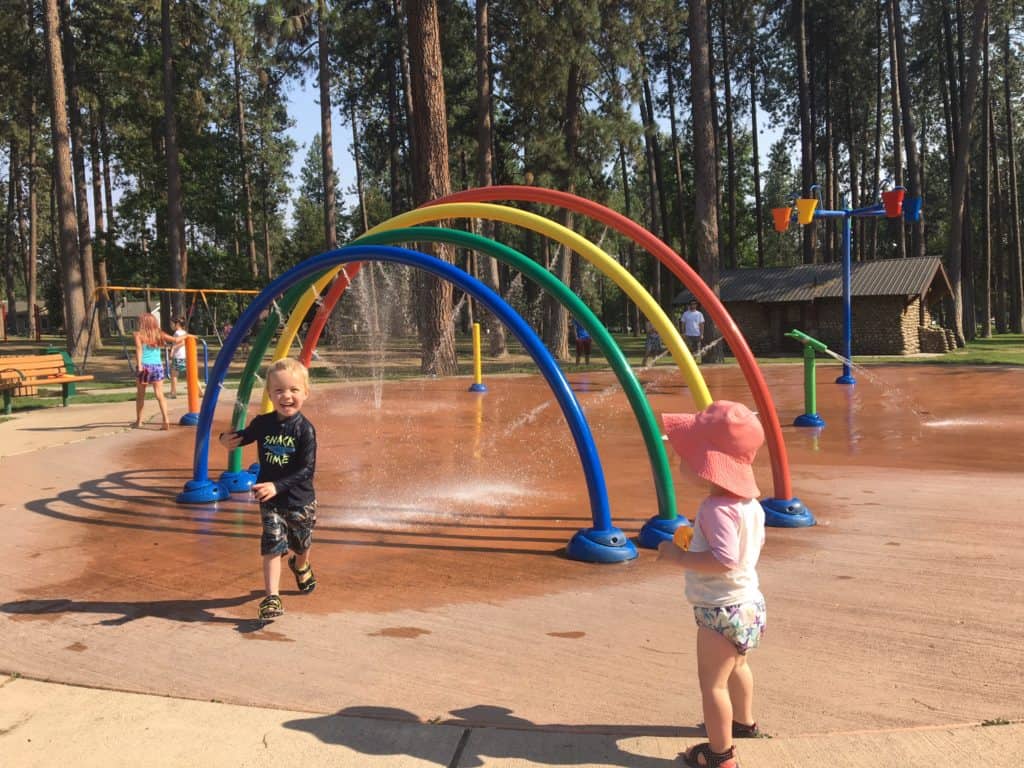 It was super hot in Spokane, so thank goodness for this local splashpad

I had been to Spokane once before for a teaching conference but didn’t realize it’s really quite wooded, hilly, and lovely. It’s like the woods stop there, though, because it was a vast expanse of dry/flat land between there and the Cascades just east of Seattle.

Once we got to the Seattle area, we made a couple stops to see some of our friends who live in the area. We had dinner in Seattle and slept that night in a Walmart parking lot. That’s not something I would recommend.

Although there were other RVs doing the same thing, there seemed to be some pretty shady transactions taking place in the parking lot as we walked into the store and back in the morning.

The next day we returned to the small town of Shelton, where I used to teach 4th grade, so I could catch up with one of my former colleagues.

After that meetup, it was a gorgeous drive up through the fingers of land inside the inlets/bays of the Puget Sound until we got to Scenic Beach State Park. It is exactly as we both remembered it to be… towering trees and an expanse of water backdropped by the Olympic Mountains in the west. 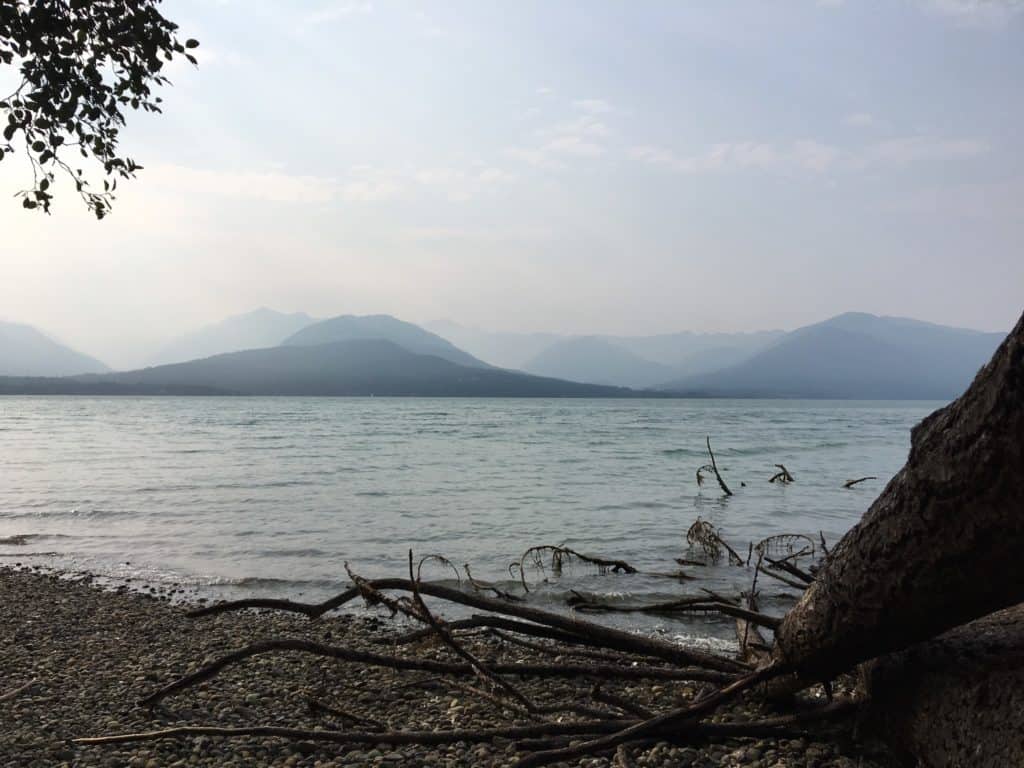 A bit hazy, but still a gorgeous view!

Unfortunately, smoke from wildfires was heavy in the area, somewhat obscuring the normally sharp view of the peaks, and resulting in a fire ban in the campgrounds.

Some friends who we met in Cuenca, Ecuador, were coincidentally visiting family in the area at the same time we were there. They showed up to our campsite with goods from Trader Joe’s and, since a campfire was out, we gathered around the picnic table to catch up and exchange some stories. 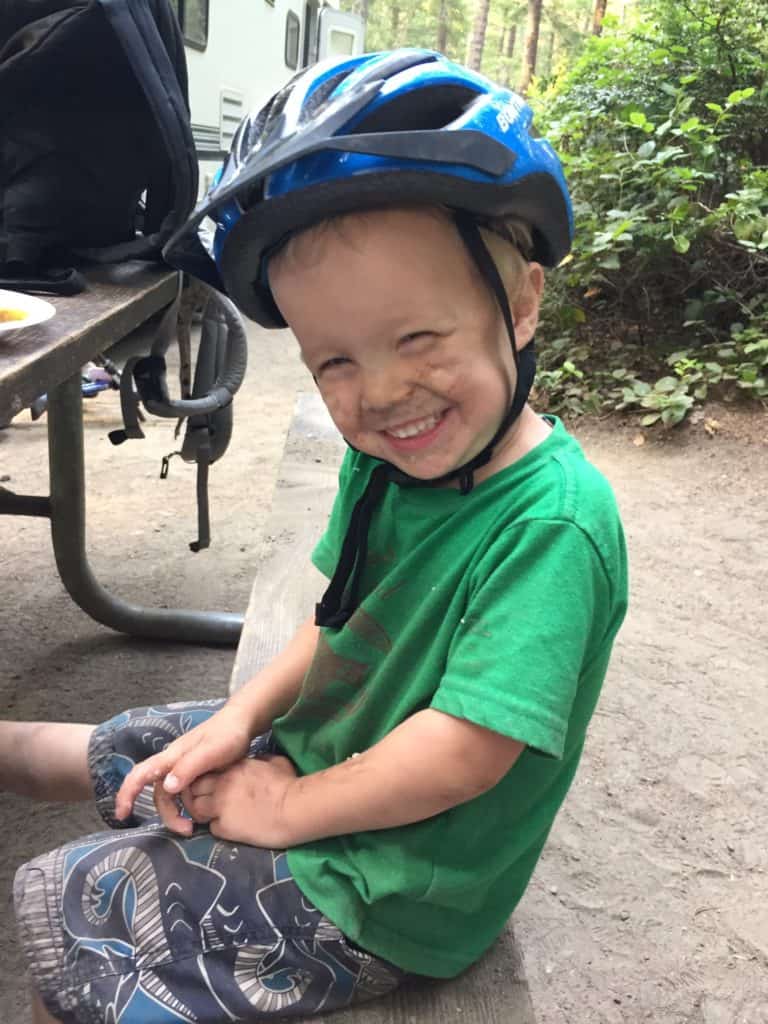 That is one filthy, happy boy.

It felt really good to revisit the site of our wedding with our two small children. They were of course too young to really understand or appreciate the sentimentality of our presence there on that particular date, but it meant a lot to us.

Michael and I reread our vows to one another as the kids played nearby. 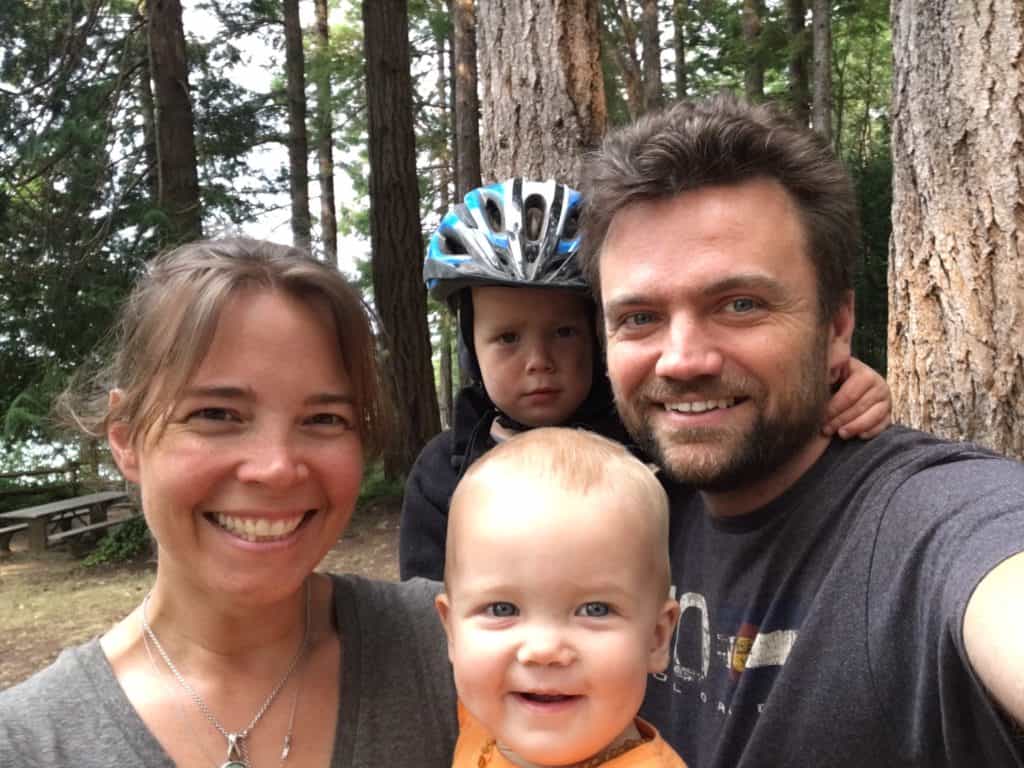 Family selfie on the same patch of earth where Michael and I had shared our vows 10 years prior. At least 3 of us are happy to be there.

After three weeks on the road and accomplishing the goal of celebrating our 10 year anniversary at Scenic Beach, we were just ready to get home. We drove and drove and drove and made it home in two days, stopping to spend the night in a Pilot Truck stop parking lot in Bozeman, Montana.

We were about a week out from the 2018 total solar eclipse and considered leaving Michael and the RV at one of the campsites in the tiny town of Glendo, Wyoming (about 2 hours from our home). We ultimately decided against it because there were no sites with electricity available.

However, on the morning of the eclipse, we left the house at about 3am to join the steady stream of thousands making it into the path of totality the next day.

We spent the morning walking about the town that had done an exceptional job of preparing for the tens of thousands of people who showed up for the day.

We talked with a small group of retirees from England who had flown to the U.S. and chosen that tiny town in Wyoming to see the eclipse. They and a surprising number of people from around the world and the rest of the U.S. hunkered down to look up at that Wyoming sky. 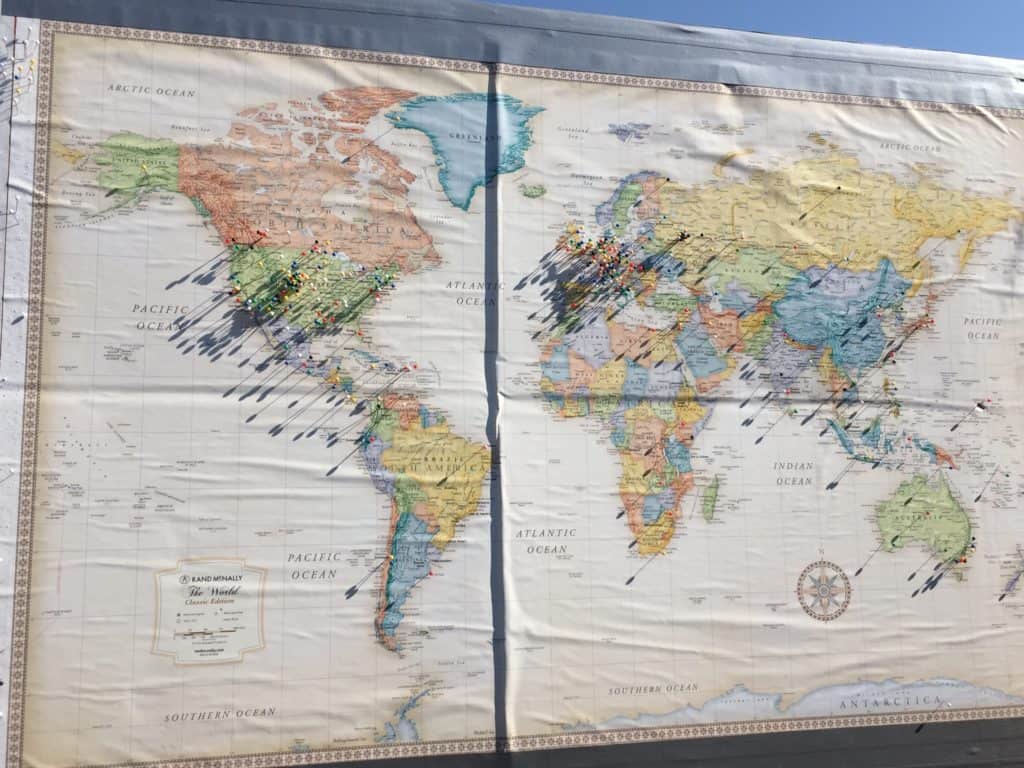 One of two pushpin maps set up in Glendo for visitors to represent their home states/countries. 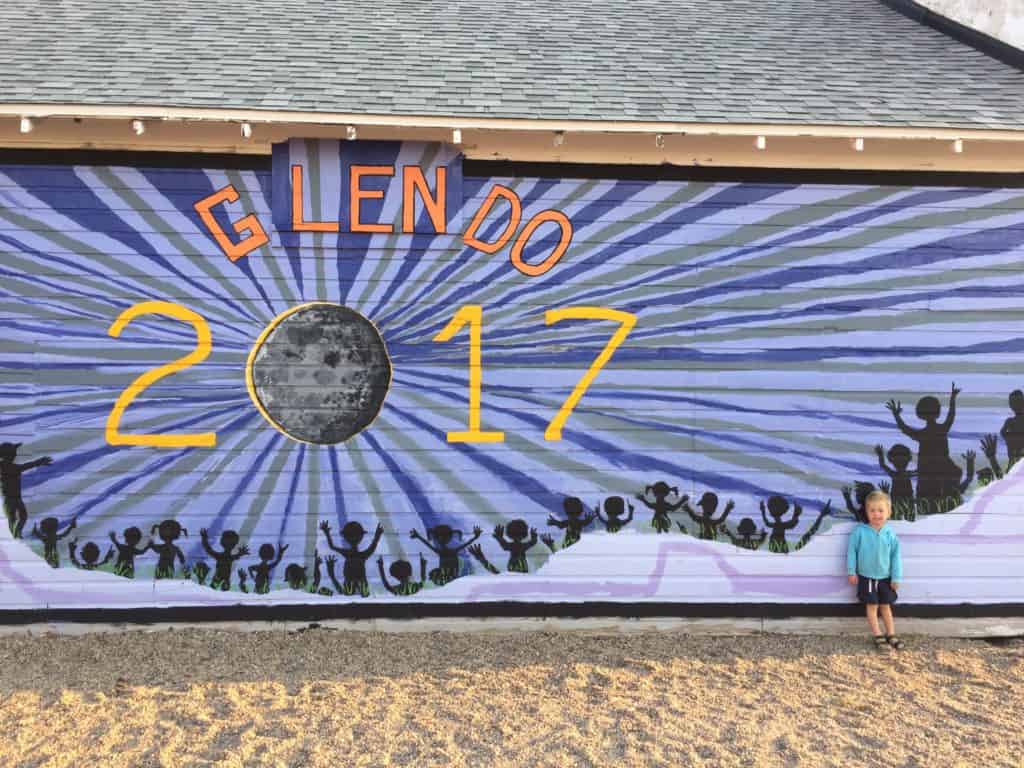 Such a cool town… they welcomed the droves of people who descended upon their tiny community with an admirable amount of preparation. 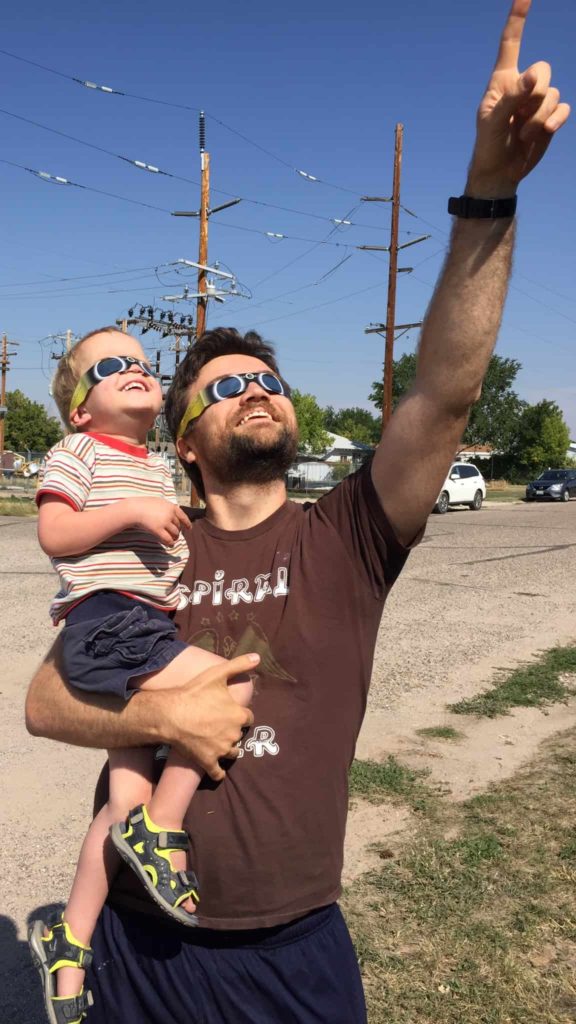 The full eclipse was pretty damn cool. The 6+ hour drive home with two cranky kids, however, was not.

Lessons Learned After the Trip Was Done

In the other post I did on THIS summer’s road trip, I allude to the work and joy of traveling with young kids. Last year was no exception, although it was a bit more challenging. Marcella was 1 and Leo was just barely 3. We traveled with an RV (the subject of next week’s post) and our Prius.

I was most often the one driving with the kids in the car. There was a fair amount of whining, crying, and not-sleeping involved. One of the darkest moments had me resorting to inserting my ear buds and turning up the music as loudly as I could stand. That helped. 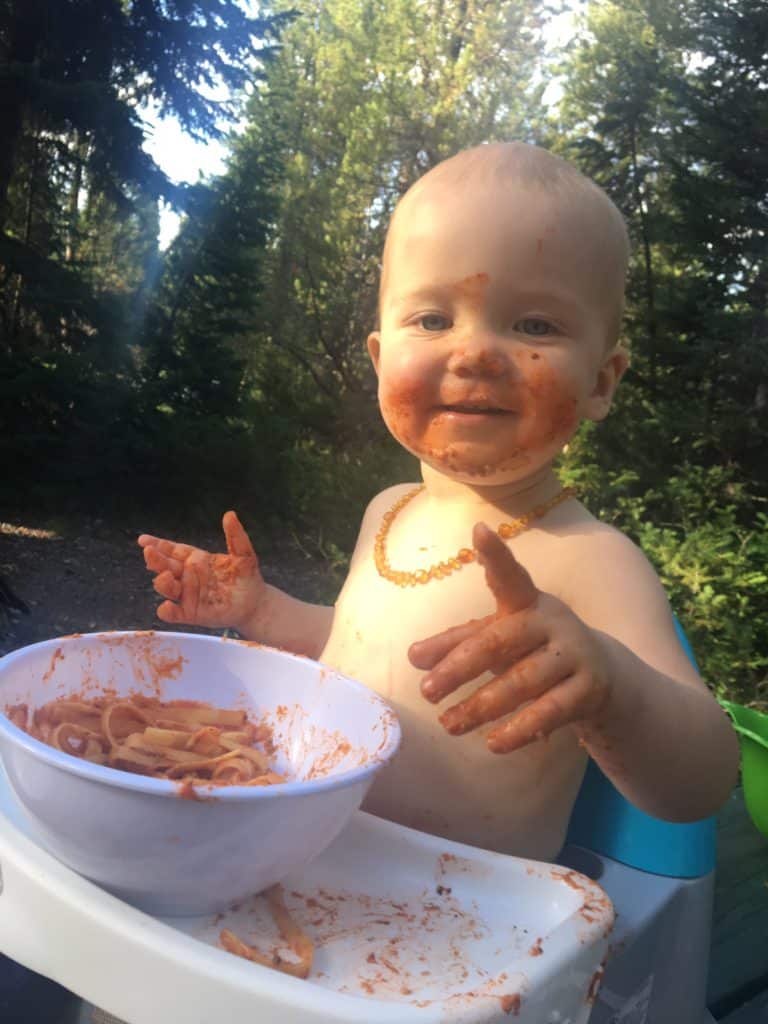 At least this mess was outside.

With that said, the moments of magic were well worth the tough times that squeezed themselves in between. I recognize that my kids are not likely to remember any of what they saw in the summer of 2017 when they were both under the age of 4. They won’t remember the mountains or the rock throwing in the lake or the steam rising off of the Grand Prismatic or the burnt pancakes with friends.

But we will. And we took LOTS of pictures.